NEW YORK, NEW YORK – AMERINGER | McENERY | YOHE is pleased to announce an exhibition of paintings and monotypes by Amy Bennett. Time Speeds Up will open on 8 September and will remain on view through 8 October 2016. A public reception for the artist will be held on 8 September from 6:00 to 8:00 PM.

The artist designs and paints from miniscule 3D models, allowing her total creative control of the scenes she imagines. She is able to manipulate composition, light, and vantage point, often in an attempt to simulate the inadequacies of memory, dreams, and the imagination.

A diorama built by Bennett acted as an evolving still life for her new paintings - developing from a fictional rural landscape into farmland and, ultimately, into a town. Citing inspiration from an altered perception of time after having a baby, a move upstate from New York City to the Hudson Valley, Google Earth images of towns, and old city maps, Bennett has spent nearly four years creating her most recent series.

Beginning with an 8-foot square of styrofoam, Bennett carved mountains, valleys, rivers and ponds, and propagated a verdant mock landscape with hundreds of wire and foam trees. She fabricated over 450 wooden buildings in 1/500 scale (similar to the size of a Monopoly hotel): houses, garages, commercial buildings, storefronts, and schools, each painted by hand. The tiny structures gradually populated her artificial town. She then mapped the complete village and stages of development over time, documenting the changes in her model through a series of paintings and monotypes, beginning with landscape imagery.

Bennett allowed the textures of transparent or partially mixed paint to mimic the natural wildness of the landscape. Bit by bit more order became imposed as property lines emerged and tidy rows of planted farmland developed. Her handling of the paint became more precise as a pond became a grocery store and a parking lot; a farmhouse became a school complex; an old house sitting at an odd angle stubbornly remained as the town built up around it.

Amy Bennett’s new paintings and monotypes, most explicitly her monotype diptychs, invite the viewer to consider shifting relationships to our surroundings over the course of time, and offer an eerie reminder of the persistence of change and the impermanence of everything.

Amy Bennett has developed another way to suggest the flow of time within the static medium of painting. Her mechanism is the creation of painstakingly detailed miniature models of the worlds that her paintings bring to life. The creation and gradual alterations of these models allow Bennett to indulge a novelistic sensibility as she imagines various scenarios and interrelationships and realizes them in her paintings.

There is something quintessentially American in Bennett’s focus on the complicated dance between privacy and exposure and in the tension between an individualism rooted in the nuclear family and the snares and attractions of community. The settings she selects are precisely those in which the American ideals of freedom and security clash. And the primacy that she gives to nature in so many of these works also reflects the American dream of nature tamed and improved—the promise of the new Eden that is so much a part of American mythology.” 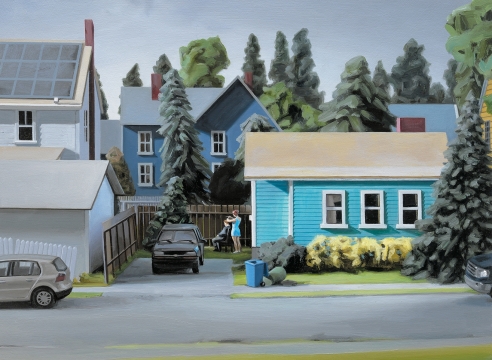