New York, New York – Ameringer | McEnery | Yohe is pleased to announce an exhibition of paintings by Hans Hofmann, Lee Krasner, and Jackson Pollock. Neighbors in a Great Experiment opens to the public March 11 and will be on view until April 17, 2010.

This exhibition will feature works by Hans Hofmann (1880-1966), Lee Krasner (1908-1984) and Jackson Pollock (1912-1956), close neighbors in the early forties on Eight Street in Manhattan’s Greenwich Village. It was a moment in America’s art history during the formative years of Abstract Expressionism when they were joined by the shared adventure of new possibilities in painting.

In his accompanying essay, Neighbors in a Great Experiment, Jed Perl writes, “Hofmann, Pollock and Krasner were involved in what Hofmann called “The Search for the Real,” and such transcendent realities, summoned in paint, were not entirely removed from the quotidian reality of coffee and cigarettes in the morning and casual conversations along Eight Street, where they were all living at the time.” During these tumultuous years when New York was fighting off memories of the depression and the news of war was causing anxiety, these three artists were cultivating styles that were audacious and impassioned. One can see this agitation and excitement in paintings from the 1940’s such as Pollock’s Greetings, a boisterous, unpredictable, miniature cacophony. There is a disquieting edge to Hofmann’s Fairytale of 1944 and Krasner’s Volcanic from the early 1950’s with its tightly packed blacks, reds and grays. Out of this uneasiness a shift began to take place in the kinds of images that were put on the canvas as well as the kinds of paintings that were seen in galleries. Hofmann and Pollock found patronage in Peggy Guggenheim and in 1951 Krasner exhibited at Betty Parson’s gallery. As Perl writes, “Everyone had come a long way since the early 1940’s, when nothing had been sure, and the young man from out west, the young woman from Brooklyn, and the old man from Munich had been neighbors in a great experiment, much as they had been neighbors on Eighth Street.” 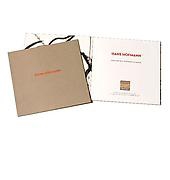