NEW YORK, NEW YORK- AMERINGER | McENERY | YOHE is pleased to announce an exhibition of recent paintings from Los Angeles based artist, Monique van Genderen. The exhibition will open on 9 October and remain on view through 8 November 2014. A public reception for the artist will be held on 9 October from 6:00 to 8:00 PM.

Monique van Genderen’s contributions to the subject of painting in abstraction are at an apex of importance within the landscape of contemporary art. The brush stroke becomes a subject unto itself in her approach, which highlights its importance as an extension of the artist’s will. Using a palette-to-canvas technique, she imbues the works with a sense of risk that undoubtedly comes from her commitment to expressing the creative process. Van Genderen’s approach to painting and installation challenges the perception of a single visual experience. For this exhibition, one large-scale painting will be installed in main gallery; another gallery holds six small- scale panels that represent fragmented versions of the same imagery from the aforementioned large-scale painting.

I so enjoyed making the large work ‘Untitled,’ 2014, that in recreating it, I got to uncover the most effervescent aspects of that painting. It was easy to arrive at the project of making six paintings that mimic the original. They are a thinner version. T hey are not a better version, nor are they sketches for the big painting.They are the contemporary mutation of the physical and philosophical process that goes into painting. They are the introductory notes to the body of the text .” –Monique van Genderen

In 2004, van Genderen was the recipient of The Chianti Foundation Artist’s Residency. Monique van Genderen lives and works in Los Angeles, CA. 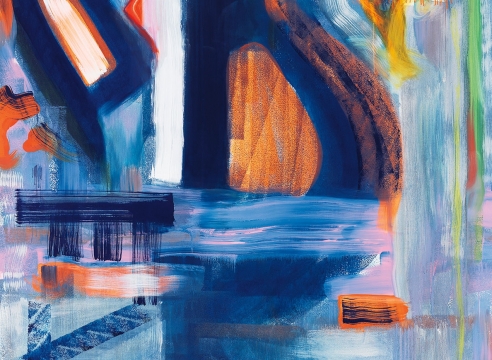