NEW YORK – MILES McENERY GALLERY is pleased to announce Mindscapes— a presentation of 72 new paintings by Ryan McGinness. The exhibition, marking the artist’s first New York solo show in five years, will open on 15 October at 520 West 21st Street and remain on view through 14 November 2020. Mindscapes is accompanied by a fully illustrated publication featuring an essay by Jori Finkel and an interview with Eric Shiner.

Mindscapes—a singular installation comprising a painting of paintings—points to the artist’s interest in exploring the tension between the site- specificity of murals and the commodification of canvas painting that began in the 17th century. McGinness is versed in both indoor and outdoor installations, and with Mindscapes, he experiments with at once immersing the viewer in the mural and liberating the mural from its architectural confines. As Jori Finkel notes in her catalogue essay Ryan McGinness and his Micro-Macro Canvas Mural, “He has found a way to have his mural cake and eat it—or slice it up...—too.”

The installation reveals the dichotomy between an exuberant and irrepressible universe that exists beneath the relatively serene superficial. Materialized in pearlescent and fluorescent paints overlaid with metal leaf, it forces a high-fidelity in-person viewing experience of the work. Manifested on an architectural scale, the 72 different canvases displayed in nine standard sizes share common motifs and colors in a cohesive

127-foot-long composition. In conceptualizing Mindscapes, McGinness left no detail unattended. The number 72 reflects the year of his birth; the height of six feet parallels his own height, causing an augmented physiological recognition for viewers of the installation; and the 127-foot-long length represents the site-specificity of the gallery space.

McGinness grew up in the skate and surf culture of Virginia Beach where he learned to silkscreen in high school. While at Carnegie Mellon University in Pittsburgh, he further developed his interest in screen-painting as a curatorial assistant at The Andy Warhol Museum. Materially rooted in the Warholian tradition, McGinness distinguishes his own acrylic on canvas painting practice with the reminder that while Warhol was interested in anti-art, he, conversely, is acutely interested in art itself. He continually seeks the essential truth within his original iconic drawings, freed from both the artist and spectator.

The Mindscapes’ dense, hyperactive, street-art inspired imagery features a profusion of images pulled from the artist’s vast lexicon of symbols: figures, hands, flowers, album covers, studio tools and psychedelic images. Resembling how our minds work—as random access memories, McGinness calls this system “a periodic table” and regularly combines visual elements to create his final composition. Similar to the alchemy visible in Hieronymous Bosch’s Garden of Earthly Delights, McGinness intends for the works to have high impact when viewed from afar. They simultaneously reveal themselves to be particularly rewarding when viewed up close, a standpoint from which the viewer is able to get lost in a world of details.

RYAN McGINNESS (b. 1972 in Virginia Beach, VA) received his Bachelor of Fine Arts degree from Carnegie Mellon University in Pittsburgh, PA. He also worked as a curatorial assistant at the Andy Warhol Museum in Pittsburgh, PA. 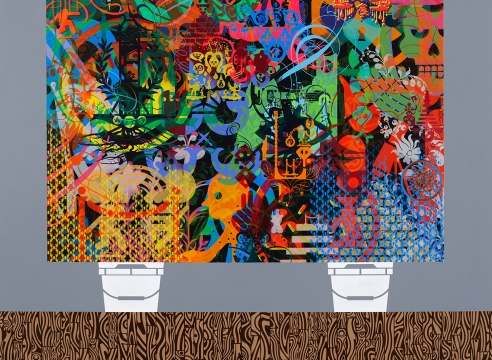 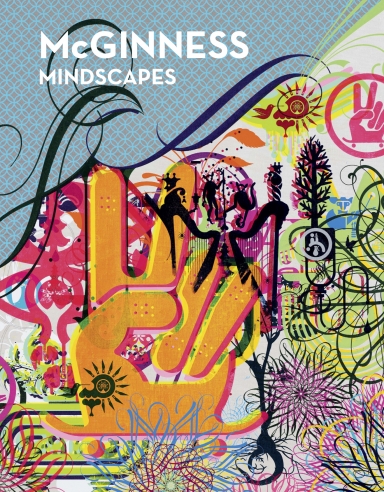 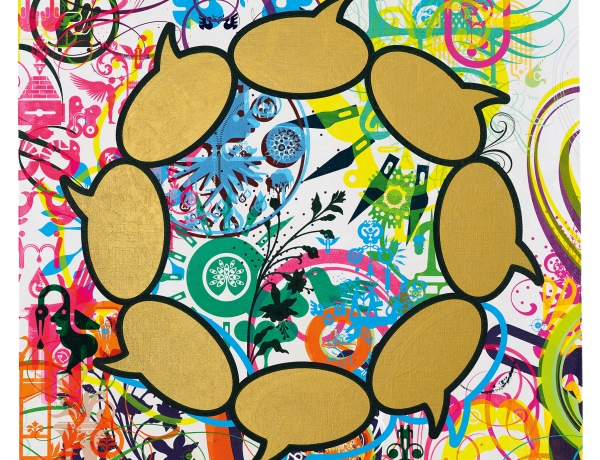 I sat one afternoon investigating the nuances and overall genius of the magical, elementally filled space on some work created by Ryan McGinness. Gloriously charged with color, twisting and turning with hints of shimmer from metal leaf elements sprinkled like silvery scales flickering. It is like a dream when you are someplace you name home, but you are not there.