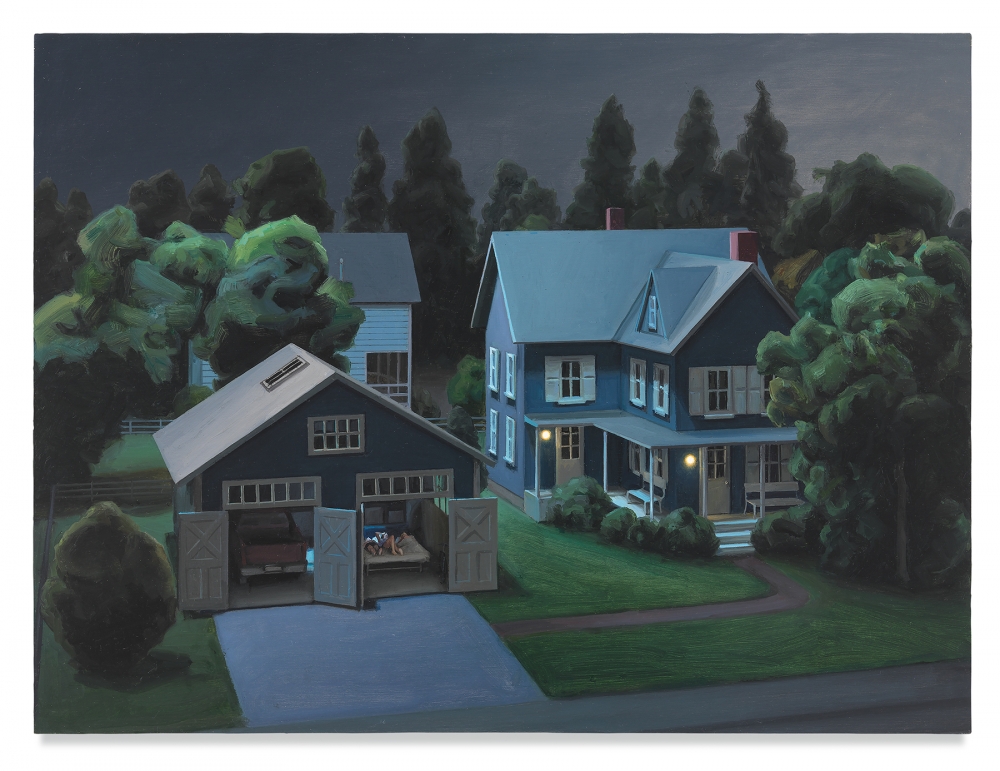 Currently on view at Miles McEnery Gallery through Aug. 16, the works presented in the exhibition explore themes of family on small, finely detailed canvases that wrap around the gallery walls like tiny windows. The paintings, replete with interior rooms and suburban landscapes, capture with serene clarity the quiet, quotidian elements that otherwise drift by throughout the course of the day.

“I have painted scenes of suburban home life in the past, but they were more related to themes of isolation and voyeurism,” Bennett said in a statement. “Now that I am entrenched in family life myself, my perspective has shifted. ‘Nuclear Family’ is more concerned with the vulnerabilities and anxieties of parenthood and marriage.”

Bennett seizes the suburbia with a palette of muted colors, punctuated with pops of bright blues. A majority of the canvases, like the moments they depict, are small. Still, despite their scale, the works are intricate and demonstrate a controlled capture of confined space.

Lending to the realistic nature of the paintings is Bennett’s method of using three-dimensional models, which she crafts herself by hand. The sets, fashioned from wood, Styrofoam and plastic, serve as situational guides that allow Bennett to retain full control of light and perspective — a process similar to that of painting a still life.

A result of this particular technique, the scenes originate from a place of stasis, lending an eerie quality to the work. Movement has, for that second, leveled off and what the viewer is left with is an impression of a still moment. In an essay that accompanies the exhibition’s illustrated publication, author Eleanor Heartney notes that Bennett’s style presents “an unsettling kind of realism — simultaneously artificial and naturalistic.”

Narrative clues seep in via the titles of each painting. In one work, an overhead view reveals two boys standing wide-legged over toilets in their individual, closed stalls. The bathroom is otherwise empty, with the door to the hallway open like it was recently flung against the wall. The stance of the two figures, who brace themselves against some unseen force, reads as anxious. And while there isn’t much else to determine from these visual signifiers, the title interjects new depth and context into the story with the deadpan addition of: “Drills – Bathroom.”

In another painting titled “Claims,” a two-story suburban home stands with its contents purged into its yard. A family looks on at the otherwise pristine blue house, now draped with yellow caution tape around its porch and surrounded by overturned couches, lawn furniture, a piano and other detritus scattered on the lush, manicured lawn. The claim, though not specified, looms over the scene, settling over all aspects of the frame like a fine dust.

While not directly expressed, story-lines bleed from one painting to another through the repetition of visual elements — like, for example, a green table that is used once by a teacher in an emergency drill and then in a different classroom setting for what appears to be a parent-teacher conference. In some paintings, the perspective of the painting shifts to reveal the same room from the viewpoint of a wall or of the ceiling.

Echoing the disquietude found in Bennett’s other series, certain moments — such as a corner-view of a delivery room or an overhead shot of a sleeping family — offer intimate glances that teeter on the edge of voyeurism. In these paintings, the cumulative feeling is that of peering into the boarded up windows of a house, unaware of what’s going on beyond what’s left on the scene but sympathetic all the same.

“Amy Bennett: Nuclear Family” is on view at Miles McEnery Gallery through Aug. 16, 2019.