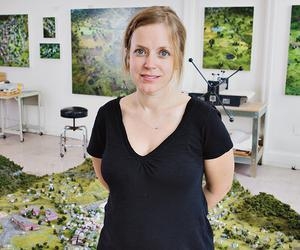 If not for rapidly rising Brooklyn rents, Amy Bennett’s last series of paintings might never have come to fruition. “Space- and money-wise, my husband and I felt pushed out,” the artist, who earned her MFA at the New York Academy of Art in 2002, explains. Hunting for a new place to call home, the painter found herself spending hours “just image-searching specific towns and looking down at them in Google maps.” By the time the couple and their young son decided on Cold Spring, in Upstate New York, she “had the impulse to build my own town.” But for Bennett, that meant doing so at 1:500 scale, or what she calls “Monopoly size.”

This makes sense, considering that all of Bennett’s canvases — some five feet wide, others no more than the size of a postage stamp — begin their lives as miniature models. She likens the process to a form of still-life painting. A previous series, “Sore Spots,” encompasses scenes of activity inside a doctor’s office, a restaurant, a theater, and a churchyard. “Neighbors,” 2005-07, appeals to the viewer’s secret voyeur, depicting snapshots from the private lives that make up a neighborhood of 11 houses. It’s no surprise that a monograph on Edward Hopper can be spied on her studio bookshelf. The photographs of James Casebere and Thomas Demand, both of whom shoot from complex models, also come to mind.

The bird’s-eye-view town scenes that will be shown in “Small Changes Every Day,” at Richard Heller Gallery in Los Angeles, opening September 10, as well as the monotypes in her project room show, opening September 8 at New York’s Ameringer McEnery Yohe, also have a narrative arc, but in a much different way. Bennett set out not only to build a town but to develop a town, and that meant starting from the beginning, with empty land. “It’s hard to move  to the Hudson Valley and not be inspired by the landscape,” she says. Bennett admits to never really loving the paintings of the Hudson River School, but on moving to the area, feeling a perceptible shift in how she thought about the land, “you understand how people have been moved by it.” So she began to build mountains and rivers and raw landforms, painting the environment she was creating. And then from those beginnings, building on her miniature acreage, cultivating it with farms and small houses springing up (almost like a pastoral version of the classic computer game SimCity). This fictional development continued apace, until Bennett’s town uncannily began to resemble the area where her own studio sits.

That studio is housed in a former science classroom in the old Beacon High School (converted into an arts center with studios, the workshops of furniture and instrument makers, and gallerist Ethan Cohen’s Kunsthalle Beacon). When I visit, Bennett’s handmade town, in the form of the eight-by-eight-foot model, is on display, prompting an enjoyably vertiginous sensation when viewed from above. It provides the same thrill as a meticulously designed doll-house or model train set. Although they’re a vital part of her process, Bennett insists that the models are not the main event. “They’re great for thinking through what my intentions are, for stumbling across accidents, and getting something that’s in my head out into the world,” she says, “but they’re all at the service of the painting.” Though the new work is devoid of figures — a first for Bennett — the story she tells with this series is still intricately tied to a fascination with daily life. “I moved into a house that was built around 1895,” she says of her family’s new digs. “It’s just crazy to think of all the people who had lived there before. Meanwhile I had just had my first child, who was, and is, growing so fast,” she says, with more than a small note of astonishment. “It’s definitely an experience that affects your perception of time.”