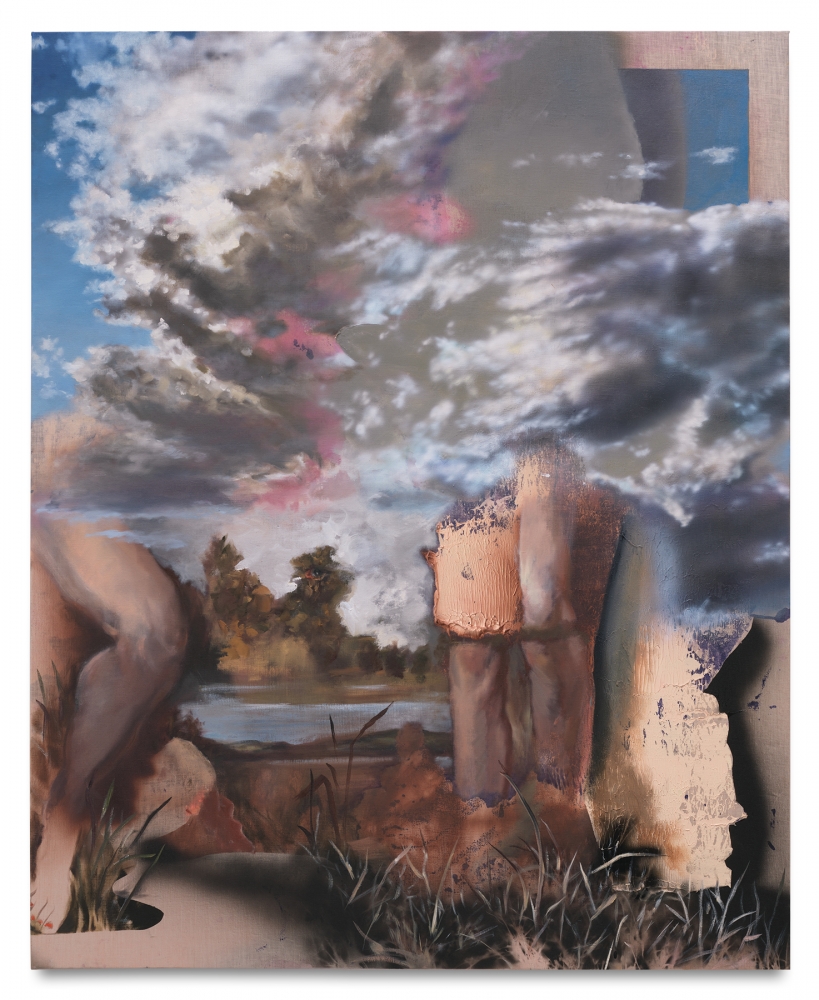 Annie Lapin’s paintings are like portals. Step inside, and you find yourself in a disquieting landscape, unfamiliar and yet eerily familiar at the same time. They shimmer with possibilities, almost in a quantum state, to the point that if you look, turn away, and then look again, you could swear that something has moved. In her works, which are basically acrylic on canvas with some mixed media elements, the compositions are discontinuous, so that fragments of landscape are interspersed with passages of pure color and form, so that it’s impossible to categorize the paintings as figurative or abstract.

In some of them, one part of the image overlaps another, creating an illusion of frames within frames, as in a classic trompe l’oeil painting. But Lapin doesn’t really see herself as being in the trompe tradition. Rather than tricking the eye, she’s involved in an ongoing investigation of the nature of perception itself. “I’ve always been interested in getting people to see that the paintings are not just pictures,” says the L.A.-based artist. “I want to have an effect on the viewer in which they’re aware of their eyes and having a cognitive moment.”

The eye-challenging effects in Lapin’s paintings are also, she explains, “a way to get the painting to shift.” She means that due to the multiple overlaid planes on the canvas, “you get multiple reads that don’t totally conflict with each other. A sky could become a figure while also operating as a sky. And that allows you to experience how things shift.” This perceptual slippage is, of course, especially characteristic of the time we are living in, when we find ourselves immersed in imagery from a vast array of sources—the internet, mass media, and our own often-overwhelmed eyes. “This has to do with how our consciousness is wrapped up with technology,” she says. “I want to create a picture that can contain multiple narratives, to create a model of how we create stories and illusions. I’m hoping this shifting picture can be a reminder that we have to be careful of the stories, intoxicating or terrifying, that we tell. There is an overwhelming complex materiality that you have to uncover, as opposed to just one story.”

Images of landscape are included in almost all of Lapin’s paintings, and nature and our experience of it is another of her preoccupations as an artist. In her work, she is confronting the fact that our experience of nature and the landscape is constantly being encroached on, disturbed, and broken up. Lapin observes that because of the effects of human beings on the landscape, especially the built environment, it can be nearly impossible to see nature without things getting in the way. Walking around L.A., she says, “the one place where you can escape the static of human creation is the sky,” and therefore she takes a lot of photos of the sky and clouds, many of which then become raw material for her paintings. Embracing the mutability of our experience of nature is an integral part of Lapin’s art. “In a world where the landscape is being taken away from us for various reasons,” she says, “this is like a last-ditch effort or Hail Mary pass.”

As she points out, it’s important to remember that our experience of nature has never been unmediated, even during the earlier centuries when the landscape painting genre first flourished. A “landscape” is not the land itself but a picture of the land, and those pictures have always contained much that we ourselves put there, even if it’s not any explicitly man-made artifacts. Lapin’s paintings sometimes contain images that recall the idealized or sentimentalized landscapes of the Baroque and Romantic eras. While she can easily get excited speaking about phenomenology, the neurophysiology of the eye, and quantum mechanics, Lapin is also fairly deeply immersed in art history, which is what she originally thought she would study in graduate school. “When I began to think about painting,” she says, “I thought, I just have to deal with this object, including all the history of the representations of that object. I like to look at early landscape painting and think about the ways that people were trying to make sense of the world around them, how they were trying to contain this idea, this myth. Landscape paintings are kind of containers, for this energy or spirit that we create societally.” Her paintings acknowledge but also try to transcend the limitations of the present moment with the regard to our experience of nature.

The work process needed to create these paintings is extremely intricate, and Lapin says she can spend as much as two years on the bigger ones. She starts with what she calls “Rorschach pours,” acrylic paint and ink (and sometimes charcoal wash, as well) poured onto the canvas to create what she calls “almost randomly generated images.” She then processes and re-processes these images on the computer until she gets the effect she wants, and then paints the result. Lapin says, “It takes hundreds of images before the final painting is done. I’ll choose one in a really intuitive way, the one that will allow me to enter. I’ll have the photo mocked up in Photoshop and then return to the work and carry out the images that I’ve created on the computer. Of course there’s the way that the hand operates, so it’s never exactly the same.” In fact, nothing in her work is mechanically transferred to canvas; it’s all hand-work, with airbrushing used “for some of the photo-representational or more realistic bits.” The art-historical elements in the paintings come from online sources, which Lapin selects from in a “flow of consciousness.” She says, “The internet expands my memory banks.”

Needless to say, this is all very painstaking and perfectionistic work. “There’s no room for mistakes,” says Lapin, “so when a mistake happens on the canvas, if it can be made into something else, I can keep the work; otherwise, it’s a loss and I have to start again.” While she has always been embarked on essentially the same project—“chasing the same ideas,” as she puts it—in the last four years she has reached the point at which “it feels at least like the ideas are coming across. Before that, her technique was more “impressionistic,” she says, whereas now it’s cleaner and more precise, more virtusosic, one might say. “For a while I didn’t paint as pyrotechnically because I didn’t want that to be a distraction,” Lapin says. “Back then I just wanted to do what I needed to to make it what it has to be. Now there’s a spontaneity to the way the images flow, though the labor and construction of the piece are very exacting. I like that juxtaposition; it’s like a koan. There’s poetry to that.” 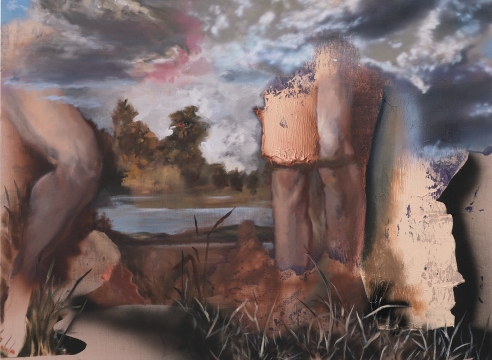