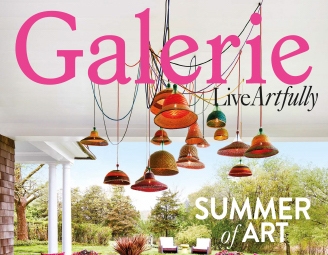 Artist Eric Fischl is standing under the eaves of Sag Harbor’s deconsecrated First Methodist Church, currently a construction site he visits almost daily. More than a year ago, Fischl and his wife, artist April Gornik, purchased the building to return it to its original intent as a community gathering place.

While precise programming plans remain fluid, there’s hope for exhibitions, performances, symposia, and master classes. The ambition is for the space to enable collaboration among artists working in different disciplines. To articulate their vision, the couple turned to friend Lee Skolnick, who designed their home and twin studios in nearby North Haven and oversaw the renovations and expansion of several local institutions: the Pollock-Krasner House and Study Center, Guild Hall, and the East Hampton Library. “I enjoy the range,” says Skolnick, who is also creating a master plan for the LongHouse Reserve in East Hampton and a visitor center for a fourth-century Roman basilica in Bulgaria. “Different projects inform one another. It’s all about finding the narrative.”

From the beginning, the team agreed to intrude on the structure as little as possible. “We want it to remain simple and warm, to respect the old quality so you feel the power of the building itself,” says Gornik, who is also gearing up for a show at New York’s Miles McEnery Gallery.

Twenty stained-glass windows representing the area’s artists, as depicted by Fischl, will connect the building to the town’s creative past. “I thought we might have a problem filling the windows,” says Fischl, who has an upcoming show of paintings at the Sprüth Magers gallery in Los Angeles, “but when we started researching, we realized how rich and diverse the town’s cultural legacy is.”