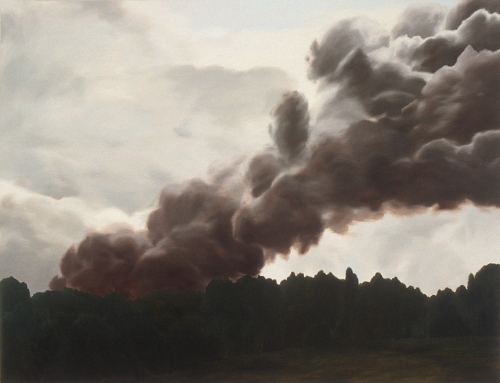 When an international art star curates an exhibition revisiting one of the most dynamic eras in American art history, expect fireworks. Eric Fischl, master of the loaded group portrait, has been the curatorial advisor for a stunning show featuring more than a hundred works by all the great personalities of the Eighties, beginning with him and his wife April Gornik, along with Julian Schnabel, David Salle, Ross Bleckner, Bryan Hunt, Jean-Michel Basquiat, Keith Haring, Kenny Scharf, Cindy Sherman, Robert Longo, Jenny Holzer, Robert Mapplethorpe, Annette Lemieux, Charlie Clough, Tseng Kwong Chi, Jonathan Lasker and others. The show also features a “hall of fame” of music and sports memorabilia, including Michael Jackson’s glove, Prince’s fashion, Madonna’s jewelry, and autographed items from the Islanders, Mets and the 1980 Olympic hockey team.

In his brilliant keynote to the show, Fischl wrote:

"When I think about the 80s I think about the energy, the confusion, the passions and the fault lines. At that time, no one knew who was going to last, who was better, everything was just pushing everything else." What a decadent decade it was! Madonna and the Ramones, David Bowie and the B-52s were rocking the Palladium and the Mudd Club, the Dow was rocketing and Wall Street was in the movie theaters, the Islanders built a dynasty and the Berlin Wall was torn down. The artists were on top of a media craze that foretold the digital era and riding a flood of investment in the art market. Fischl compared it to catching a wave off Montauk: “That feeling of being swept up and carried by something so much bigger and more powerful than yourself, something you’d worked so hard to catch, and now you’ve caught it and you’re in it.”