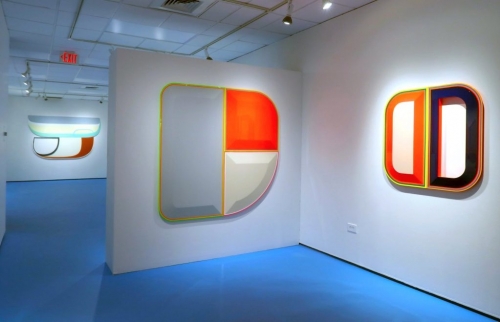 On view at the University of Connecticut’s Contemporary Art Galleries through November 29 is “Constructed,” a lively exhibition of seventeen works by five distinguished midcareer painters whose handling of color—as a kind of visual armature—is inseparable from structure. The show’s curator, Museum Director Barry Rosenberg, calls on Beverly Fishman, Marilyn Lerner, Paul Pagk, Joanna Pousette-Dart and Cary Smith for evidence that, in a rising challenge to the current fashion for figurative painting, “a counterrevolution featuring new tactics of abstraction is bubbling to the surface.”

Further along in the press release, Rosenberg asserts that “today’s best abstract art isn’t a redo” of past movements or styles or approaches. “Rather,” he writes, “this work is embedded with the personal experiences of these artists, speaks to this cultural moment, and draws inspiration from the broader history of abstract painting.”

We assume that to some extent the artists’ personal experiences are embedded in this work—how could it be otherwise? We also readily surmise that histories of the discipline they practice are sources of insight and motivation; there are no “outsiders” on this roster. But the remarkable claim that the work “speaks to this cultural moment” raises the question of just how it is that the rarefied idiom of geometric abstraction might do any such thing.

Cary Smith’s Complex Diagonals (Blue-red)is the most plain-spoken painting in the show, and the most insistently non-referential. Hot orange-red stripes subdivide a pungent blue ground along horizontal, vertical and diagonal axes; their interaction induces dazzling afterimages. Paintings produced through reductive means run the risk of being readable at a glance, but Complex Diagonals (typical of Smith’s larger paintings) avoids that fate by virtue of perceptual complexities, deadpan humor and technical finesse.

Less convincing, however, are Index Painting #12 (Treust Masor Soin)and two others from this numbered series, into which the self-quoting Smith packs, bento-box style, several miniature versions of his favored compositional schema such as contiguous, lolling ovals; branching diagonals; an airy grid of polychrome rectangles (here, against a pale blue ground); and a hyperdigitated “splat” shape. Grouping these pictorial abbreviations on a single smallish canvas heightens the sense that they are proxies for larger, more fully embodied paintings. They function as logos pointing to this artist’s signature motifs. If branding is a phenomenon characteristic of our cultural moment, Smith is working it.

A design aesthetic also informs the flawless surfaces and even, luminous colors of Beverly Fishman’s low reliefs, which are made with urethane paint on shaped wood panels. They derive from the artist’s repertoire of symbols for mental and physical maladies (anxiety, pain, depression, asthma, digestive problems, high blood pressure) in a palette ranging from panic-disorder orange to comfortably-numb gray-green. Untitled (Sleepiness, Opioid Addiction, ADHD)consists of three such sections—a rectangle with two rounded corners, a square with one rounded corner, and a quarter-circle—joined in an asymmetrical hybrid shape that resembles an enormous pill.

Each section features slightly beveled margins that are subject to a bit of actual highlighting and shadow; several thin bands of saturated, contrasting color outline them, as if trying to cheer them up. These clinically precise, maximum-strength paintings address the subjective experience of disease with counter-intuitive formal clarity.

Are such part-to-whole relationships emblematic of our “constructed” time? The hard, curved edges of Fishman’s paintings contrast nicely withthe swelling, organic curves—more like curls—in Joanna Pousette-Dart’s, which similarlysuggest a recombinative method. Thinking outside the box of painting’s default rectangularity, Pousette-Dart has long favored a format consisting of a small number of vaguely boat-like shapes, stacked one over another.  Floating World has two; the upper one is physically larger but chromatically lighter—hazy and pale—and it exerts an odd kind of pressure along the edge it shares with the lower, smaller, punchier panel.

The resemblance of this painter’s work generally to some of the distinctive characteristics of Northwest Coast native American painting is striking—in particular, those ubiquitous curling, pointed, bird-beak contours and longitudinally truncated ovals— but she’s stated that she’s not consciously appropriating, that she arrived at these motifs organically. Becoming aware of Northwest Coast art at an early age undoubtedly influenced her authentic sensibility (“personal experiences”—check), and anyway I’m more interested in the degree of visual autonomy of the painting’s top and bottom sections. Pousette-Dart’s take on modularity is different from Fishman’s; the individuation of each panel is checked by form-fitting brushstrokes that echo their edges. They feel stretched and smoothed as if the painting were a pillow, and gently tucked in at the corners.

Expressions of cultural momentousness in Marilyn Lerner’s paintings emerge from their musicality and are in synch with the contemporary interest in interdisciplinarity. In The Nature of Sisters, a contrapuntal grid as complex as a fugue mirrors itself in a disco ball; Inside Outsidestrikes a beautifully somber chord of three inflected grays (purplish, greenish, and brownish ovals) against an inky ground; capricciocolor notes embellish a droning midsection in Black Center.

The outlier among Lerner’s paintings is the circular, three-foot-wide African Violet. Angled notches on the left and right imply a spinning motion (33 1/3 rpm?) and the bebop palette—warm/cool, light/dark—is rooted in semi-neutralized secondary colors but breaks into squeaky sequences of saturated color that outline a central pair of vertical ovals.

Subtle though it is, a nonconforming stripe is the main event. This daring brushstroke—in a pink barely paler than the ground—breaks free, races across the painting, hangs a hard right and angles downward toward an eccentric teardrop shape dangling like a carrot.

Two exquisite drawings suggest the origins of Pagk’s board game/cage images (there is a second painting, equally commanding) might be in an exploration of linear perspective and/or axonometric drawings. The inclusion of these small framed works varies the visual rhythm of the installation, which includes primarily mid-size paintings. The exhibition is visually dense and tests the compact confines of the gallery. Such crowding could be intentional, I suppose, a curatorial gesture alluding to the visual overload that cultural commentators often cite as a characteristic of contemporary life.

And really, if you’re fomenting a “counterrevolution,” you’d better bring plenty of ammunition.

About the author: Stephen Maine is a painter who lives and works in West Cornwall, Connecticut. His writing has appeared regularly in Hyperallergic, Art in America, ARTnews, Art on Paper, The New York Sun, Artillery, Artcritical.com, and Artnet.com Magazine.