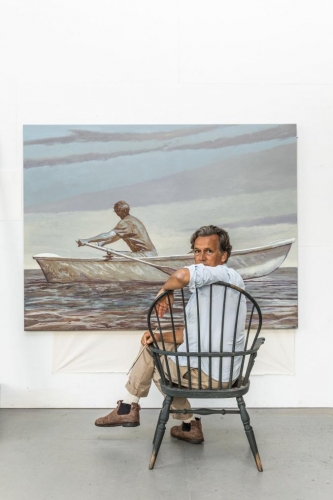 It's easy to get turned around when you visit Maine. You’ll often find that your smartphone map gets you lost on a dirt road or foggy beach. The blue blazes of its hiking trails disappear among granite boulders and pines. There’s a saying in these parts: “You can’t get there from here.” But some people do know their way around this rugged place: Adventurers who reach remote coves by ferry or kayak, lobstermen and loggers who work amid its wild landscapes, and artists who have studied its beauty.

Attracted to its rocky shores, pine-tall forests, and granite mountains—and armed with paint brushes, cameras, and carving tools—artists have been drawn to Maine since before it became a state 200 years ago. Among those moved to stay and create: Georgia O’Keeffe, who frequented York Beach in the 1920s, painting its dark waves and white seashells, and Marsden Hartley, who rendered Mount Katahdin, Maine’s highest peak, in vivid crimson and violet.

Maine is remote, reserved, and at the edge of the map of America. Yet it’s played an oversized role in U.S. art, evidenced by what’s in museums and galleries across the country: Hartley’s Katahdin paintings at New York City’s Metropolitan Museum of Art, Walker Evans’s poignant photos of Mainers at Los Angeles’s Getty Center. It would be impossible to catalogue all the artists who have walked or worked on this soil. Art was slated to play a major part in the state’s bicentennial celebrations this year, before the pandemic sidelined most festivals and many exhibits. Nonetheless, Maine’s art history provides an inspiring way to mark the anniversary.

There are plenty of homegrown Maine artists, including indigenous Wabanaki makers. But a major reason the state lures so many creatives is its vibrant patchwork of art schools, colonies, and residencies.

In the late 19th century, isolation and affordability inspired the first artist colonies in Ogunquit in the south and on the remote island of Monhegan, 12 miles offshore of midcoast Maine. Communities drew people such as Rockwell Kent and George Wesley Bellows, who captured Maine’s distinctive landscape, particularly the dramatic coastline. (See the resulting paintings at the Ogunquit Museum of American Art in Ogunquit and at the Farnsworth Art Museum in Rockland, respectively). Later, as land became more expensive, formal colonies began popping up around the state.

Visitors included textile artist Anni Albers, who taught at Haystack Mountain School of Crafts on Deer Isle in the 1950s and 60s, painter David Driskell, who studied at the Skowhegan School and bought a summer home in Falmouth, and glass master Dale Chihuly. There are programs for sculptors (Skowhegan), crafters (Haystack), illustrators (Illustration Institute), and photographers (Maine Media Workshops). Professionals and amateurs can take classes at most schools; established artists find residencies at Acadia National Park or on farmlands (at Jefferson’s Fiore Art Center).

The Indigo Arts Alliance was founded in 2019 to bring creatives of color to Portland. Maine is one of the most homogeneous states in the U.S., with nearly 95 percent of residents identifying as white on the last census, so the organization’s work is overdue. Its downtown space has hosted photographers and printmakers with works that challenge stereotypes about Maine art (lighthouse paintings are not top priority).

In the mid-1800s, members of the Hudson River School journeyed to America’s northeastern coast to document its dramatic tides and undeveloped land. Thomas Cole and Fredric Edwin Church were perhaps the most famous. Over the next five decades, many other realists followed.

The wave crested in the early 20th century, when Winslow Homer set up a studio at Prouts Neck and began producing images of the southern Maine shore, many of them now on view at the Portland Museum of Art and Rockland’s Farnsworth Art Museum. Edward Hopper came soon after, ultimately spending nine summers in Maine. Like Homer, he painted lighthouses and cottages, rowboats, and cliffs. But Hopper brought more daylight to his work, distilling the sweet amber of late August rather than Homer’s trademark dramatic blue tones of winter.

Later in the 20th century, father-and-son artists N.C. and Andrew Wyeth famously depicted the state’s people and places. N.C. captured landscapes and fishermen; Andrew later eclipsed N.C.’s fame with his quiet, realistic images of the countryside and shore in a restrained winter palette of browns, grays, yellows, and whites. Works by both Wyeths are on view at the Farnsworth.

Realist painters are perennially smitten with Maine’s golden salty light of summer and the purple-tinted winter. Rockland’s Dowling Walsch Gallery showcases many of their works, including the large, sun-drenched canvases of Bo Bartlett. The contemporary realist splits his time between Columbus, Georgia, and Wheaton Island, Maine, turning out pieces grounded in the natural world but lifted by playful surrealism. His images of ordinary people boating, biking, or just hanging out evoke Maine, but the best version of it: cinematic and lodged in a perpetual golden hour.

“I know the paintings of Wyeth and Hopper,” says Bartlett. “Over time, their works became like familiar friends.” Although he paints in the brushstrokes of genius, Bartlett’s primary inspiration comes from his isolated surroundings. “We live on an island, we are the only inhabitants,” he says. “We are humbled by nature, in awe of its force and relentless power.”

Georgia O’Keeffe is known for Southwest desert pinks and sage greens and David Driskell for his vibrant cityscapes, yet both painters swirled their brushes in Maine’s deep green-dominated color palette and dove into its forests and waves to create canvases outside their normal oeuvres.

Maine seems to make artists want to try something new. While some observers of its in-your-face nature like to produce it faithfully, others speak loudest by veering away from photo-realistic scenes; they prefer obscuring, abstracting, flattening, and slanting things.

O’Keeffe turned the Atlantic Ocean’s steely blue waves into undulating swells of color. Marsden Hartley’s paintings of inland, mountainous Maine have a similar ebb and flow but with more contrast and a greater weight. Hartley understood the state as a bulky place, stacked with lumber, strewn with boulders.

Some of these works can feel oppressive when viewed one by one, their insistence on the greatness of the landscape overwhelming and sinister like a November storm. But Maine abstracts can be playful, light, and doused with joy, too.

New York painter Alex Katz, known for his clear-lined, boldly colored portraits, summers in Maine. Several of his large-scale works are in the collection at Rockland's Center for Maine Contemporary Art.

Lois Dodd has expanded the Maine palette to include the florescent yellow of a spring forsythia bough and the robin’s egg blue of an October sky. Although less famous than Katz, Dodd produces work singing a similarly bright tune, showing the grace of small things—vernacular saltbox architecture, sheets hanging on a line, a window open to the sea. Her thoughtful vision resonates locally. In 2013, the Portland Museum of Art was the first institution to mount a major retrospective of her work; several of her paintings are in its permanent collection.

For Jon Imber and Jill Hoy, Deer Isle was a place of solace. The husband-and-wife duo came there to work when their home in Somerville, Massachusetts, was too hot, too busy, too loud. They painted both together and separately, and while they each have their distinctive styles (Imber’s intense portraits, Hoy’s summery gardens), the cross-pollination is clear. Even when Imber was suffering from late-stage ALS, he continued to paint images filled with motion and joy. Imber died in 2014, but Hoy still lives and works in Maine. “It was here that I became a painter with an appreciation of Maine land and seascapes, work ethic, architecture, and gardens,” she says.

The exquisite crafts of the Wabanaki people, who have been in these parts for more than 13,000 years, reward close inspection. Before the U.S. existed, before “art history,” Wabanaki craftspeople were here, weaving strips of ash bark into light, strong vessels shaped like strawberries or urchins. Examples of their works are displayed at the Abbe Museum’s two locations in Bar Harbour.

Jeremy and Gabriel Frey are brothers, members of the Passamaquoddy Tribe, and artists creating contemporary works using ancient methods. In the past two decades, Jeremy has noticed an uptick in interest in Indigenous fine art and craft. “Native people weren’t taught to value themselves,” he says. “But the work is no less valuable. I’m currently working on a piece that has taken me two years—it took one year just to gather the materials.”

Such work, Gabriel adds, is dependent on Maine. It springs from it, speaks to it. “We have an intimate relationship with the landscape and the plants that grow on it,” he says. “Indigenous forest stewardship is a practice in reciprocity. The forest gives us trees to make our baskets, and we help regeneration through our selective harvesting practices.”

For illustrator and puppet-maker Ashley Bryan, Maine allows him to tap into his inner child. “The beauty of Maine, especially the Cranberry Islands, opened up my creativity,” he says. He incorporates found objects (sea glass, driftwood) into his whimsical puppets and stained-glass windows, some on view at The Ashley Bryan Storyteller Pavilion, next door to his Islesford home. Although celebrated for illustrations, Bryan brings his inventive eye to many mediums, always deeply grounded deeply in place.

This is may be the wave of the future. Art no longer fits into neat little boxes. The boundaries between fine art and craft have been broken down. “What is art?” asks Jeremy Frey. “You know it when you see it. It’s like love at first sight. It’s no one thing. It’s the energy of a piece.”

Brunswick-based sculptor John Bisbee, who creates large-scale pieces using nails, agrees. “For me, it’s not overt,” he says. “The landscape doesn’t show up in my work, but it’s the rhythm behind it.” Take his sculpture Hearsay, outside the Portland Museum of Art. Its intricate cone looks like a phonograph made of railway spikes, both familiar and mildly disturbing.

Bisbee is now working on a record of songs inspired by his time in solitude during the pandemic. (One song includes the lines, “God comes and goes, but when he’s here, he’s here with me, tangled up in my beard.”) Songwriting is like sculpture, he explains, fueled by the same impulses.

“It’s about the endless breath of the tides coming in and out,” he says. “I’m looking at it right now. It’s constantly charging my battery up, that 17-foot tidal zone we have here. The rhythm plows through my days and clears a path.” 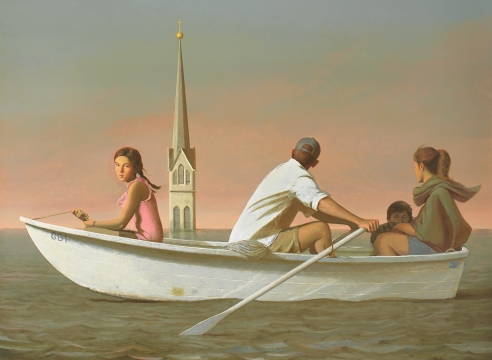