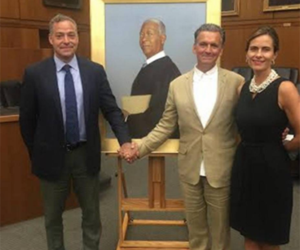 A portrait of a federal judge that Columbus artist Bo Bartlett worked on for almost two years was unveiled Thursday night in a Washington courtroom.

Bartlett was selected to do the portrait several years ago.

I have only done one or two portraits in the last 10 years, but this one really interested me,” he said. “I wanted to do something fresh and different.”

The painting of the judge is unmistakably Bartlett. The judge, in his robe, is in front of a blue background. The painting stands out when placed next to the portraits of other judges.

I really enjoyed doing this,” Bartlett said. “He is such a great guy and I got to know him and we became friends in this process.”

Much of the work on the portrait was done in Bartlett’s Columbus studio. Bartlett is an America realist painter who works out of his hometown of Columbus and Wheaton Island, Maine.