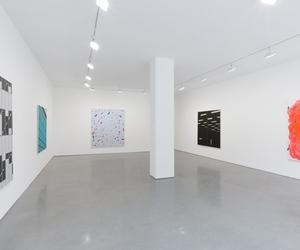 Postcards from the End of the World: Brian Alfred’s Colorful, Cautionary Tales

Painter and digital artist Brian Alfred presents the world as a series of flattened fragments. Working from photographs, the Brooklyn-based artist digitally creates compressed, simplified images that capture the energy and anxieties of the modern world. Highway overpasses, empty offices, cityscapes, and even public figures’ faces are reduced into planes of flat color, which the artist carefully paints in taped-off portions, creating crisp images that sit somewhere between the handmade art of paintings, cartoon-like animation, and mass-produced perfection. His latest series, on view in a new show at Ameringer | McEnery | Yohe, takes automobile racing as its point of departure.

Summoning the visual and emotional aspects of the sport, and considering the multiple vantages from which it can be experienced, Alfred has divided the raceway experience into sharp, graphic compositions, executed in his trademark vibrant style. He delivers a thrilling narrative through carefully cropped compositions, inspired by the track itself, skid marks, celebratory confetti, sponsor logos, and even the cacophony of a crash. The show’s title—“It Takes a Million Years to Become Diamonds So Let’s All Just Burn Like Coal Until the Sky is Black”—sets the tone of the exhibition, and takes its name from a composition by the experimental band Storm & Stress, with which Alfred has collaborated in the past. (The band’s guitarist Ian Williams, also of Battles, will play at the exhibition’s opening). In tandem with the exhibition, Alfred presents a mural work at the corner of Houston and Elizabeth Streets, in collaboration with Rag & Bone, a new print created with Atelier Ace Editions of the Ace Hotel, and an animation with SEdition.

The works in the show continue Alfred’s investigations into industry, progress, dystopia, and the hazy distinction between past and present. By highlighting the infrastructure that humans create—and by extension the things it prioritizes and facilitates—Alfred shines a light on what society values, and the ways we define ourselves today.

Recent works, such as Office and Buddh (both 2014), evidence a concise, effective visual language. In Office, for instance, geometric shards of white paint on a black grid suggest a voyeuristic look into an empty office building late at night; Buddh turns the painted markings from Buddh International Circuit in India into a minimalist composition of rhythmic orange and white lines—a similar approach to that used in Cover Track (2014), another painting from the upcoming exhibition. Interestingly enough, despite Alfred’s interest in human behavior and its consequences, the world he depicts is relatively devoid of signs of life. Instead, he paints a universe where only the physical evidence of our existence remains, in the form of monuments to commerce, globalism, speed, and consumption. Painting it all in candy colors and deceptively simplified forms, Alfred allows the viewer to digest what otherwise might be a very hard pill to swallow.