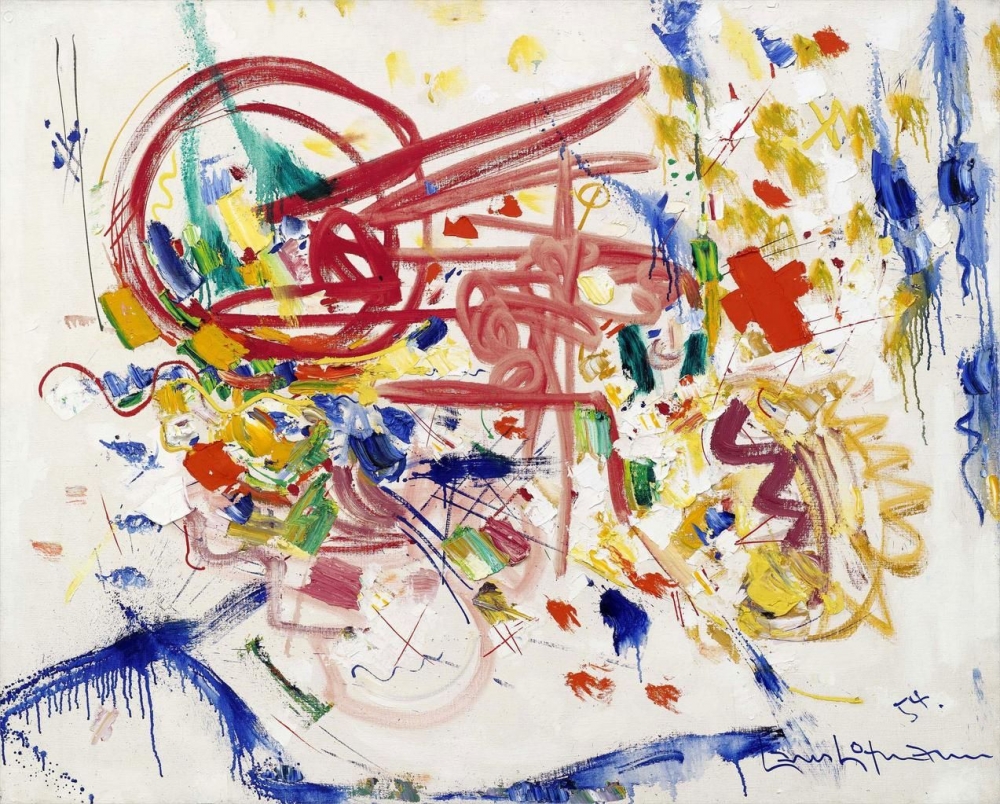 The author’s study paired four-year-old Jack Pezanosky’s painting with Hans Hofmann’s “Laburnum” and asked subjects to choose the real artwork. (This one is “Laburnum.”)

In 2007, works by a painter named Freddie Linsky were sold at the Saatchi Online Gallery. The paintings were described on the site as similar to the “spot and blotch” technique of abstract expressionist painters such as Jackson Pollock, and they were impressive enough to earn the artist an invitation to exhibit his work at a gallery. It turned out, however, that Freddie was only two years old, and his work, made with ketchup, was put up for auction by his art critic mother as a joke.

As this story suggests, there can be a striking similarity between works of abstract expressionism and paintings by children—or even by chimps, monkeys and elephants. Paintings by chimpanzees were once sneaked into a museum and mistaken for art that belonged there. No wonder that even highly educated people sometimes deride abstract art as requiring no skill at all, saying, “My kid could have done that!”

But could a child really? Is there no perceptible difference between abstract paintings made by a professional artist and the daubs of children or animals? To test this proposition, my research group, the Arts and Mind Lab at Boston College, designed a series of experiments testing the response of people with no art background. We wanted to find out whether people with no special knowledge of abstract art could tell the difference.

In our first study, participants were shown pairs of images, each containing a painting by a famous abstract expressionist—such as Mark Rothko or Hans Hofmann—and a painting by either a child or an animal—chimp, gorilla, monkey or elephant. The paired works were superficially similar in color, line, brush stroke and medium. In each set, one image was labeled “artist” and the other “child,” “monkey, or “elephant.” But in half the examples, the labels were deliberately reversed, so that, for instance, a Rothko could be presented as the work of a child. In other pairs, there were no labels at all, and participants were not informed that one of the paintings was by a child or animal.

In other words, participants were significantly more likely to choose a work labeled “child” (but actually by an artist) as better than a work labeled “artist” (but actually by a child). They were ignoring the labels and responding on the basis of what they saw in the painting itself. And they offered more “mentalistic” justifications for their choices when they chose the work by the artist, saying that it showed more planning, skill or intention.

In a second study, we took a different approach, using the same pairs of images but no labels. This time, we told participants that in each pair one painting was by a famous abstract artist and the other by a child or animal. Their job was to pick the one by the artist. Guessing at random would yield a rate of 50% correct answers. As it turned out, the average score was 63%, which closely matches the average score obtained by people in the first study. We got the same results when the images were presented unpaired.

Of course, whether you consider this a vindication of abstract art or a blow to its pretensions depends on the beholder. While people could tell the difference between professional and child- or animal-made art at a rate significantly higher than guessing, they did still confuse them about a third of the time.

When we presented these findings to a group of art historians, we were surprised at their irritation. They showed a kind of religious view, treating works by master artists as so sacrosanct that one should not even raise the possibility that they might be confused with the paintings of children and animals. They seemed to think that by pairing these works, we were deriding the works by artists.

But our intention was just the opposite: We hoped to show, and actually did show, that when people untrained in visual art gaze at an abstract expressionist painting and claim that their child could have made it, they are wrong. Lay viewers see more in abstract art than they realize.

What exactly are they seeing? To find out, our team collaborated with Claude Cernuschi, an art historian at Boston College, to determine what qualities might allow people to identify genuine abstract expressionist paintings. We came up with six possible qualities. These included the sense of intention behind the work, its degree of visual structure, the sense of conflict or harmony it conveyed, whether it inspired or elevated the viewer, and whether the work seemed to communicate with the viewer.

To test these propositions, we undertook a new study, showing people the same images one at a time and saying nothing about the works having been made by either artists, children or animals. We then asked participants to rate each painting in terms of our hypothesized distinguishing features. As it turned out, works by artists were rated higher than the others on only two qualities: intentionality and visual structure. It makes sense that these would be related: Artworks have structures because they are the result of a series of deliberate choices by the artist.

But it isn’t just our conscious minds that can tell the difference between professional art and art by children or animals. In collaboration with Sergio Alvarez, a computer scientist at Boston College, we designed an experiment to measure “implicit response”—that is, how long people looked at paintings, as recorded by an eye-tracking camera. When asked to decide which of a pair of images was a better work of art, people looked at the artist images, on average, for 9.17 seconds and at the child and animal images for 6.66 seconds. On an implicit level, people respond differently to “real” artworks.

We may find it amusing to think that people are paying millions of dollars for works indistinguishable from the scribbling of a 4-year-old. But the truth is that people untutored in modern art see more in abstract expressionism than they think they see. The traces left by artists differ from those left by children and animals: We are able to see the mind behind the art.

—Dr. Winner is Professor of Psychology at Boston College. This essay is adapted from her new book “How Art Works: A Psychological Exploration,” to be published Nov. 5 by Oxford University Press.