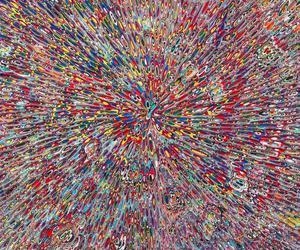 When Hunk Anderson was a senior at Hobart College in Geneva, New York, in 1948, he and two enterprising classmates started providing meals for students who were hungry after dining-hall hours. Initially investing $500 each, the three partners grew Saga, their grassroots business, into the nation’s largest college food-service contractor. In 1962 they moved their headquarters to Menlo Park, California, adjacent to Stanford University.

As pioneering West Coast art collectors, Harry W. Anderson, who still goes by his beefy nickname, and his wife, Mary Margaret, known as Moo, have shown the same sort of American pluck and ingenuity that made Saga so successful. “We were absolute novices,” says Hunk, recalling a 1964 visit to the Louvre. “On our way home from Paris, we decided to see if we could become knowledgeable about art and put together a dozen paintings and sculptures.” They began a process of self-education that blossomed into a passion around which they have structured their lives for 50 years. The result: one of the most significant private collections of postwar American art in the world, with more than 800 works displayed throughout their ranch-style home in the Northern California Bay Area—built in 1969 with art installation in mind—and a nearby nine-building office campus designed in 1964. (Saga was sold to Marriott in 1986, but Hunk retained his office and continues to exhibit art throughout the hilltop complex, renamed Quadrus.)

In 2011 the Andersons promised 121 works to Stanford, which will unveil the Anderson Collection at Stanford University, a dedicated museum for the gift, in September. “We will miss them,” says Moo, referring to prized canvases by Jackson Pollock, Mark Rothko, Sean Scully, and Terry Winters, along with 86 other works that will come from the walls of their home and office. “But then new kids will be coming in. It will be exciting.”

Sitting at their kitchen table, where they have entertained visitors including Richard Diebenkorn, Philip Guston, and Frank Stella, Hunk, 91, and Moo, 87, who met at a local yacht club during college, are unpretentious and gregarious, looking more like the golfers they are than like arterati. The lack of formality is just part of the disarming charm that has won the couple close relationships with artists, dealers, and academics. But they also do their homework. Initially attracted to the Impressionists at the Louvre, they began their self-education by consulting catalogues, then acquired Fourth of July Parade, circa 1886, by Alfred Cornelius Howland, a peer of Winslow Homer. They went on to buy a smattering of works by European Impressionists including Monet, Pissarro, and Renoir.

The couple’s collecting became more focused in the late 1960s after they met Albert Elsen, a Rodin scholar at Stanford who steered them toward modern and contemporary work. “We became enamored with the first internationally acclaimed American art movement and set our sights on the Abstract Expressionists,” says Hunk, who sat in with Moo on some of Elsen’s introductory classes and took his advice to consider only museum-quality works. With more resources available for art after Saga went public in 1968, the Andersons developed a wish list, identifying, for instance, which Pollocks were in private hands. With the help of dealer and collector Eugene Thaw, they stalked Lucifer, 1947, for a couple of years before acquiring it from an entertainment mogul. The quintessential drip painting hung, along with works by Josef Albers and Ad Reinhardt, in the bedroom of their daughter Mary Patricia, a.k.a. Putter. Moo notes that although Putter got to choose the works that hung in her room, she was completely indifferent to the art as a child. Now an art adviser, she has since come around, but like the contents of many children’s bedrooms, her impressive choices are being moved by the Andersons out of the house—as part of the gift to Stanford. In addition to Thaw, Elsen introduced the Andersons to New York Museum of Modern Art painting and sculpture curator William Rubin. In the early 1970s, Rubin sold the couple five major works from his own collection—a sculpture by David Smith and canvases by Willem de Kooning, Adolph Gottlieb, Rothko, and Clyfford Still. The collectors acquired two 70 other canvases by Still at the time, the largest of which they donated to the San Francisco Museum of Modern Art in 1974. The gift caught the attention of the notoriously cantankerous and controlling artist. “He was very curious to know who, all of a sudden, had three paintings,” remembers Moo, who received a call from Still’s wife that year saying they were visiting San Francisco and wanted to see the Andersons if they would send a car. “Of course, I was the car,” says Moo, who still motors around Palo Alto in her 1979 Porsche 911.

Despite Still’s hauteur, the Andersons were tickled to have the artist hold court in their home. “I’m not sure if they recognized anybody else” in the collection, jokes Hunk. “The emphasis was on Clyfford Still.” Patricia Still asked them to shade their walkway so no direct sunlight would hit 1957-J No. 1, 1957, the towering canvas acquired from Rubin, hanging alongside works by Rothko and Louise Nevelson. The Andersons did as instructed. “We had to,” says Moo. “They came back and checked on us.”

The Andersons had far more easygoing friendships with Guston, whom they championed for having the courage to shift from abstract to figurative work when critics initially panned him, and Diebenkorn, whom they affectionately call Dick, and whose work they collected in depth. They were introduced to the Santa Monica-based artist by Stanford faculty member and painter Nathan Oliveira, who was also instrumental in directing the collectors’ attention toward California artists such as David Park and Peter Voulkos. Balancing New York School artists with their West Coast counterparts appealed to the Andersons as it reflected their own move from New York.

The Andersons work primarily with galleries. “Once you find their taste is the same as yours, you keep going back to them,” says Moo, noting that dealers including Edith Halpert, Robert Elkon, and Martha Jackson “were very influential to us, teaching us how to look, recommending books.” In the last couple of decades, Putter has introduced them to younger generations of galleries and artists. She was instrumental in getting them to take another look at Susan Rothenberg, who Hunk initially thought was “just fooling around with horses.” She steered them toward Nick Cave as well as California artist David Allan Peters and Sam Richardson. Putter also helped select the 121 works going to Stanford. Long before they decided to create a gift, “Moo and I had always thought about which 100 works would form a core collection of the second half of the 20th century, both east and west,” says Hunk, explaining it was a game they played when thinking about their collection. About a decade ago, Putter became a part of those discussions, causing the number to swell as she advocated for artists including Lynda Benglis, Squeak Carnwath, Jay DeFeo, and Nancy Graves. “It’s a family affair,” Hunk says.

The Andersons have always been committed to sharing their collection with others. From early on, they have regularly opened both their house and the office to groups and students. In 1975 they initiated an intern program, giving Stanford Ph.D. candidates the opportunity to work with the collection, which continues today. More than 30 graduate students have participated, including Neal Benezra, now director at SFMOMA, who was one of the first interns to work with the couple in their home. “I don’t think mentor is too strong a word,” the director says of his relationship with Hunk. Unlike many students pursuing doctoral degrees, Benezra was not pulled toward a career in academia. “The opportunity to work with such important collectors gave me direct exposure to works of art and, ultimately, museums,” he says. “It’s a different kind of art history. Working with Hunk every day, I learned about the real world of art.”

Bay Area institutions have long benefited from the Andersons’ generosity. In 1992 the couple donated 30 important Pop works by artists including Claes Oldenburg, James Rosenquist, and Andy Warhol to SFMOMA. In 1996 they gave more than 650 contemporary prints to the Fine Arts Museums of San Francisco. When considering where to bestow their core collection, Hunk says they were impressed by the Stanford Arts Initiative, begun five years ago to construct new facilities and integrate the arts throughout campus life. “It is creating art as a discipline equal with engineering, humanities, medicine, and so forth, which we wanted to be a part of,” says Hunk. The university’s willingness to build and operate a new light-flooded facility by Ennead Architects, where the collection would stand alone, was instrumental in the choice. “It’s worthy of that,” Hunk says of the gift.

The Andersons have historically made donations to SFMOMA and the Fine Arts Museums of San Francisco,” says Jason Linetzky, who was the collectors’ curator and has become director of the Anderson Collection. “This one to Stanford now completes a triangle of seeing how these gifts work in different institutions. Anyone coming to the Bay Area will have an opportunity to see the full extent of the holdings.”

After the 61 works come down from the house and another 60 from Quadrus, the couple look forward to the opportunity to rethink their home. The monumental Sam Francis canvas over the living room fireplace, facing off with the Morris Louis over the couch, will be replaced with canvases by Helen Frankenthaler and David Hockney from the office campus. A figurative work by Park in the family room will take the spot of Lucifer in the dining room, alongside the sole Still and lone de Kooning they are keeping. The wide hallway in the bedroom wing, which will lose Serpentine, 1961, by William Baziotes—one of Putter’s favorites—and canvases by Ellsworth Kelly, Agnes Martin, and Robert Motherwell, will be rehung with original works on paper and prints, as was originally intended for the space when the house was built. Still active collectors, the Andersons are particularly excited to bring in some of the younger artists they have acquired recently, including Mark Fox, Julie Mehretu, and Kate Shepherd.

Hunk, who still goes to the office every day, says he has relished managing the collection full-time since selling his business in 1986. “It keeps us motivated,” he says. “It keeps us interested. It’s one of our hopes and desires that this is going to do the same for other people who are going to be able to see this collection at Stanford. I think it has had a direct influence over our relationships, as well as our longevity.”

A version of this article appears in the July/August 2014 issue of Art+Auction magazine.