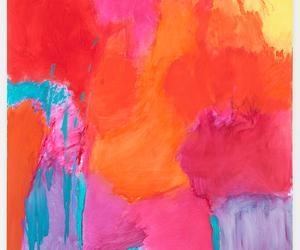 Emily Mason, a painter whose work represents both a unique marriage of understatement and gestural expression and a union of vibrant color and minimalist reserve, receives an examined look at her recent work at Ameringer | McEnery | Yohe Gallery.

Measured by Mason’s simultaneous participation in the “Inventing Downtown” show at NYU’s Grey Art Gallery—a show about artist-run galleries in the early 1950s—the artist’s career has been built on decades of developing a painterly language loose enough to allow multiple voicing, yet purposeful enough to assert a lone sensibility.

Walking through the Ameringer “Emily Mason: Recent Paintings” exhibition, on view from January 5 and through February 11, 2017, the viewer becomes aware that Mason’s concerns change almost radically from canvas to canvas, apparently and not unexpectedly from the development of each painting’s individual character. Yet an overall feeling of the artist’s grasping and searching for order remains comfortingly steady, and is reinforced as the viewer backs up and scans the group from a more typical viewing distance.

As different as each canvas may seem up close, there is a reassuring cohesion to the work as a whole, which raises the question: how does Mason maintain this cohesion without appearing arbitrary or capricious in her choices?

Though Mason’s palette is keyed to the higher pitches, it avoids the flash and punch embraced by much recent abstract painting. Apparently not interested in deadpan statements or the lure of eye-candy, she creates works that are for all their luminosity quite minimal and understated. Limited to exclusively warm or exclusively cool tones, with occasional bursts of the opposite, her color is luxuriantly calming and free of sharp contrast. Color choices keep to closely related tints of the same hue. The variety and nuance they deliver is a result of texture more than color.

My guess is that Mason is keenly aware of how one’s distance from each canvas changes the feeling of each piece. This may be true in general for most painting, but what’s unique here is how the artist seems to revel in the ambiguity of the experience. Proximity holds the key to each painting’s essence. And to appreciate the essence requires moving up close and then back, absorbing along the way a palpable sense of the painter’s process—especially her judgment. Judgment is key. Mason is a thoughtful painter whose work displays and celebrates the elusive properties of disciplined visual thinking.

In two separately installed groupings—one of larger paintings, one of smaller panels—the artist’s knack for balancing assertion and adjustment creates a dialectic that keeps an attentive viewer tuned to the special properties of each painting. A determined sense of choice and commitment forms into a loose cohesion spread across the work that echoes a persistent sensibility, but a sensibility that stretches and adapts to each picture’s demands.

These canvases are all about one thing, though each asserts a unique and often partial resolution. The range of feeling they engender is surprising. The more vociferous among them, for instance Renewable, 2016, seem to break into song, while the reticent Support, 2016, holds back as indifferently as an arctic sunset.

The compositions themselves are conventional in the manner of mid-20th century abstraction. The quickly-read structure of a near square canvas called Breath of Fresh Air, 2016 (one of the show’s larger canvases yet measuring no wider than a person’s outstretched arms) is anchored by pale magenta washes emanating from the upper right and lower left corners of an otherwise scarlet field.

The upper area is clearly in its original state, with patches of white ground revealed through areas similar to those often rendered by watercolor painters. Just below, a section of the same white patch has been partially overpainted with a dry brush pulled from the intense red of the middle area. The effect is that of altering the sense of backlighting that subsequently emphasizes the paint’s role in obscuring the ground.

The sections of direct and spontaneous application are sometimes reminiscent of Helen Frankenthaler’s work, though without the finality of the staining process that color-field painters often used. Because Mason paints on a prepared white ground, not raw canvas, her transparent washes seem more akin to J.M.W. Turner’s late work, especially regarding that vague sense of landscape that nags at a viewer’s attempt to read its implied space. True to the tradition of mid-century abstract painting, these works resist such interpretation, remaining stubbornly fixed at a moment in the process when the artist was compelled to simply let it alone.

Most impressive is Mason’s dedication to a style of painting that has long passed in popularity, though aspects of its fundamentals are much older than modernism. The allure of a stain on a wall, as Leonardo once suggested, can feed extravagant flights of imagination yet it remains a stain on a wall. This is a mystery as old as art itself. The painter who can harness this persistent contradiction into a disciplined pictorial equilibrium is a rare creature.