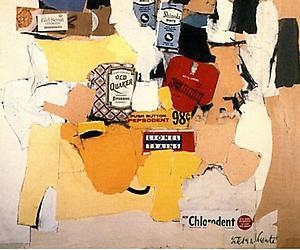 Esteban Vicente’s death in 2001 at the age of 97 marked the passing of one of the last surviving members of the first generation of New York School painters. He arrived in America in 1936, schooled in the old world academic tradition of his native Spain and fresh from a sojourn in the heady milieu of 1920s Paris. Yet his openness to new influences and to new friendships, including those with artists Jackson Pollock, Willem de Kooning, and Mark Rothko, assured his crucial role in the evolution of Abstract-Expressionist discourse in 1940s and 50s New York. Vicente and his wife Harriet first came to the East End of Long Island in 1963 and the next year brought an old farmhouse on Montauk Highway in Bridgehampton where they lived for nearly forty years. The barn in the rear of the property became his studio and the surrounding garden that he cultivated over the years provided a vital connection to nature. The works of art brought together here—painting, collage, and the whimsical diminutive sculptures called “divertimientos,” or toys— illumine the course of Vicente’s career from the 1950s to the 1990s.

In 1949, during a stint as a visiting professor at Berkeley when he found himself without a studio, he began to work in collage. For Vicente, the new medium was endlessly absorbing and he began a life-long pursuit. “I think of collage not as a separate, limited medium,” he said, “but simply as another mode of painting.” The cut or torn papers could be easily moved, introducing a freedom not found in painting, and Vicente shifted seamlessly between paint and collage throughout his career. Vicente always remained attuned to the possibilities of experiment and invention, perhaps best seen in the “divertimentos,” made from scraps of wood that lay scattered about the studio. The playful and elegant sculptures are a reminder that Vicente originally trained as a sculptor and underscore the openness and receptivity that exemplify his estimable career.