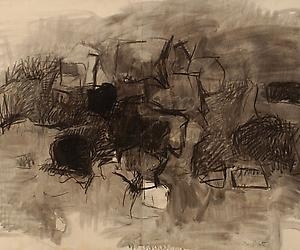 One of the good things about art history is that it is always being rewritten. In the case of the New York School, that self-described Greatest Generation of midcentury artists, newer histories have moved past the singular, heroic-figure narrative to emphasize the era’s inherent collectivism and internationalism, and the presence of women — and not just as wives or lovers.

The first room focuses not just on collectivity, but also on what a wall label calls “connectivity”: artists gathering casually in the 1940s at a cafeteria in Greenwich Village and eventually forming the Club, which met for both social purposes and panel discussions centered on philosophy, music, poetry, literature and film.

Several works here are by artists included in the historic Ninth Street Exhibition of 1951, mounted by Vicente and other Club members in a building that was slated for demolition — a kind of proto-alternative space that shifted attention away from the commercial galleries of 57th Street to the downtown artists’ scene. Robert Richenburg, one of these artists, is represented by “Silent Thoughts” from 1961, a brooding work that extends the collage conversation since it was made by ripping paper rather than applying pigment to the surface.

Many artists were using a black-and-white palette during this period. Charlotte Park’s ink-on-paper work from 1952 is a good example, as is a work on paper by her husband, James Brooks.

The dense, intricate field of markings in Ms. Park’s work are echoed in Alfonso Ossorio’s “Couple and Progeny” from 1951 and “Playing Children” from 1949. Ibram Lassaw takes the diffused overall markings in a different direction: his untitled ink and watercolor work from 1951 is actually a finely drawn and detailed composition, rather than a characteristically spontaneous, New York School outburst.

In this setting, works by art stars like de Kooning (with whom Vicente shared a studio floor on East 10th Street in Manhattan in the early ’50s), Lee Krasner, Motherwell and Pollock feel like part of a larger network of ideas and approaches rather than objects crafted by lone-wolf geniuses. And yet, they still call up works from the historical art canon. A simple 1951 ink drawing by Pollock predicts “Blue Poles (No. 11, 1952),” his last monumental painting, in which figurelike poles emerge out of the skein of drips. A diminutive de Kooning from 1966 looks back to his “Women” of the 1950s. Motherwell’s ink-on-paper “Spontaneity No. 3” from 1966 centers on an oversize, vaguely Asiatic abstraction — reminiscent of his “Elegies to the Spanish Republic.”

The show reaches out to include Vicente’s classmates, coworkers and students. There is a quasi-religious watercolor by Dalí, who studied art in Madrid at the same time as Vicente. The Mexican artist Rufino Tamayo, represented by a 1934 gouache on paper depicting a dreamy, sleeping moon, taught art at the same private high school in Manhattan where Vicente taught Spanish.

Dorothea Rockburne, a student of Vicente’s at Black Mountain College in Asheville, N.C., is represented by a luminous work on cotton and abaca (a plant fiber), “Einstein’s Cross,” from 1998. Slightly younger students like Chuck Close and Susan Crile worked in a figurative vein, differing with Mr. Vicente. But Ms. Crile, quoted in a wall text, says, “Esteban gave you permission to be yourself as an artist.”

It is not until you reach the museum’s third and final gallery that you focus on Vicente’s work: large, bright abstract canvases and the collages. (An exhibition dedicated to Vicente’s collages is also currently on view through March 26 at the Grey Art Gallery at New York University in Manhattan.)

Early canvases feature jagged, abstract shapes hovering in dark gray fields, like an untitled painting from 1949, or the more assured “No. 9” from 1953. Vicente’s palette lightened in the ’50s and ’60s, with canvases like “N” from 1959, which includes passages of electric green, orange and yellow, or “Princeton No. 5” from 1966, with its vaguely biomorphic collagelike shapes vibrating in a bright field.

Even in this gallery the words and photographs of other artists are given attention. A display case includes a printout of a 1953 text, originally published in ARTnews and written by Elaine de Kooning, with photographs by the multigenre artist Rudolph Burckhardt. Ms. de Kooning, a painter and writer (more often cited as the wife of Willem de Kooning), describes how Vicente “backed into collage one Sunday in Berkeley, Calif., in 1950, because he wanted to work and his paints and brushes had not yet arrived.”

The real revelation in Ms. de Kooning’s article, “Vicente Paints a Collage,” however, is that Vicente began his collages with charcoal drawings rather than merely arranging bits of cut or torn paper. This leads visitors back to a large charcoal drawing, “Untitled No. 18” from 1958, where you can see him sketching out vague shapes; then to several of his collages placed around the room; and finally to his paintings, which suddenly register as paintings sprung from collages, with their juxtaposed elements functioning, as Ms. de Kooning puts it, like “action caught at an impasse” to create “an art of interruption.”

Ms. de Kooning circles around this idea of the “interrupted” artwork, looking to cinema, and to poetry. Vicente’s work, she writes, is “caught midway in an attitude of surprise, like Marianne Moore’s ‘real bird in a painted tree.’ ” This feels like a fitting description of Vicente’s abstractions. It also feels appropriate, however, as an analogy for artists lodged in the ever-shifting, painted tree of art history.