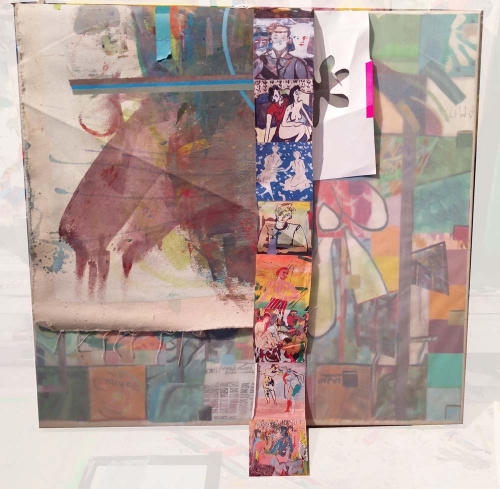 Next to Nothing presents a group exhibition that revisits early Modern figurative painting and Symbolist poetry through the recent work of 12 contemporary artists. The artists in the exhibition inflect Modernist forms with contemporary perspectives on intimate subjects including: the poetics of domestic architecture, the pertinence of ancient myth, and the solipsism of art history.

The exhibition is styled after three poems by the Symbolist poets Apollinaire, Mallarmé, and Baudelaire. In their eponymous poems, the window is a conduit that allows for the transmigration of the soul to a stratum of sublimity. In the words of Baudelaire, “He who looks through an open window from outside never sees as much as he who looks at a closed window. There is no more profound, mysterious, fertile, dark, or dazzling object than a window lighted by a candle.” There is a certain irony that Matisse, with his preoccupation with pictorial space and frequent return to the motif of the window, was among those painters touched by the suggestions of the aforementioned Symbolists. His flattened depictions of space, which preclude a complete reading of depth, form an analogy with Baudelaire's closed window.

The artists in the exhibition share Matisse's penchant for simplified volumes and orthogonal compositions but their work is much closer in spirit to the psychological introspection of the Symbolists that preceded and informed Matisse's milieu. By combining Matisse's inventions in drawing with the Symbolist predilection for subjective narrative they paint their work and at the same time repaint the work of Matisse in their own image. As Nikos Hadjinicolaou explains,“The work of art we have before us is the history of its consumption which has been determined 'each time' by the aesthetic ideologies of each present [time period], these being in turn conditioned by the ideologies of contemporary social groups.” As if looking through Baudelaire's window, the pictures in the exhibition are an exit out of the influence of Matisse's graphic style to the echoisms of the artists' innermost reflections. Through the absorption of the artists' narratives into the fictional spaces of the works, the unspoken poetry of these images function as windows capable of mobilizing the beholder through a myriad of visual passages thereby connecting our understanding of art history, our perception of domestic and intimate spaces, and our situation in those spaces.