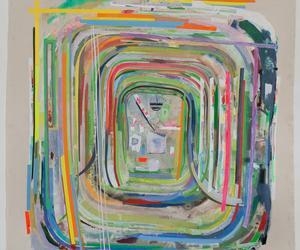 La lama di Procopio is a collective contemporary art exhibit, realized thanks to the collaboration between Dolomiti Contemporanee and the AGI Verona Collection by Anna and Giorgio Fasol, and that hosts the works of twenty-two young international artists.

They come to the eagle’s nest, so to speak, up in Casso, in the heart of the Vajont area, a gallery space found right in front of Mt. Toc and, subsequently, the Vajont Tragedy, meant to oppose its unbearable predatory dominance. This is DC’s vision in Casso, one that is also shared by the collector collaborating in this venture. This is what is needed to be understood when reaching this place with the intent of bringing art into such a critical context, through such an experimental project.

The artworks relate themselves to the space and time of this almost suspended arena, in a mangled contraption of history, and contribute to the regeneration of the human, cultural and historic landscape of the Vajont. A good exhibit isn’t always identical, a sequential copy of itself: the peculiarities and the context’s charge are crucial factors that need to be taken into consideration.

Bringing art up here is a challenge, the relationship between art and the complex nature of the human experience is a marker of the quality and depth of research, that doesn’t exhaust itself in the stasis of the staging.

Or, perhaps, it does. But it isn’t simply the exhibition space the one that moves, in this case: staging, setting up in Casso is staging, always, the meaning of space in a landscape with a great level of criticality.

Art is a responsible cultural practice, it is the voice of the human who delves further, because they exist. If decoration were all we sought, then a contemporary upholsterer would have been enough.

The collaboration with AGI Verona Collection is important in that sense. Thus manifests itself a will to generate a sensitive intellectual movement, shared by the collector and by Dolomiti Contemporanee’s curators, facing the complexities of space and meaning. And that should be the first and foremost mandate of art. The artworks depart from the usual routes, which occasionally become ossified, to instead climb the mountain, and to measure up to its sides, its firmness, its crests, its landslides. To conceive new images and landscapes, to give new life to the land of the humans, those inside their minds and hearts.