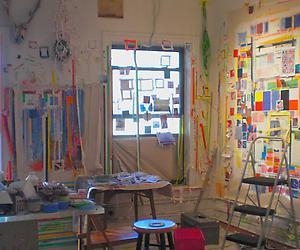 Nearly 50 visits in and I finally made it across the river to draw, spending the day with Franklin Evans in his studio in the Lower East Side a couple of Saturdays ago. After making my way down Bowery, I looked up to see short neon strips of tape and painted pieces of paper that were missing their center squares, dangling from the inside of windows of a second floor apartment building. I knew I was in the right place. I had the overwhelming feeling of having been in this studio before when I walked in to his space. I soon realized I was thinking back to the strong impression his elaborate mixed-media exhibition at Sue Scott Gallery had on me in the spring of 2012. It was a memorable glimpse into the artist's mind, studio, and process. Evans was breaking the fourth wall with that exhibition and remembering it made me even more eager to begin my drawing.

The scatter of exuberant colors and layers of rumination in Evans' work, both on his canvases and in his installations, smartly challenge the viewers' understanding of how things are made. I liked being given the chance to look at the paintings so completely while drawing them. I was able to finally break down their building blocks while attempting to recreate them in pencil. Some of the painted imagery, which is often repeated and presented in a square snap-shot format, reads like transient thoughts or obsessions, a snippet of the synapse between art and life. He explained that these images range from new favorite artworks, to childhood photographs, to his own previously made paintings. And then there are these phantom likenesses to artist tape — used to break up space, accent pictorial images, or vibrate colors — that are hard to make out as having been removed or never attached at all. Their actual use in many of Evans' installations acts as a mirror and another iteration of his process. Underneath it all, with a squinted eyes stare, I made out completed paintings, reminding me of color field artists, gluing together the chaos of the canvas. Sporadically looking up from my drawing and seeing Evans working, made me think of a television show detective who pieces together clues while pinning them up on a cork board. More like a howdunnit than a whodunnit.

I got more and more lost in Evans' work throughout the day, my obvious obsession with artist studios being manifested in his paintings and then again on my paper. Moments of chatter led to moments of silence as our concentration waved in an out of intensity. I was lucky to see this work in progress and to have Evans share with me the plans for his upcoming solo show opening this June at Ameringer McEnery Yohe. If you need to see something even sooner, he is also in great looking group show, titled Material Images, at Johannes Vogt Gallery up until April 5th. And, if you happen to be in Reno, Nevada, he has an installation at the Nevada Museum of Art up until April 20th. To see more of Evans' work go here http://www.franklinevans.com/.