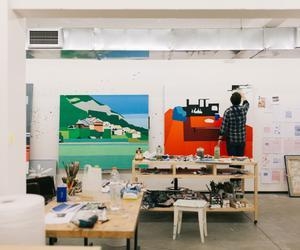 The Love of Beginnings book was actually given to me by a shrink that I was talking to years ago, like maybe over ten years ago,” says Israeli artist Guy Yanai, whose latest exhibition of the same title was influenced by JB Pontalis’ autobiography.

It was strange to get a book from her, and even stranger that the book had tons of highlights and notes all around it. As if I could see and hear her reading it. I remember reading it so slowly,” he adds. “What struck me the most (and resonated) was the non-linear fashion of the autobiography—these sort of black holes that appeared between periods of his life. I think that there a few of these black holes between the three paintings of this show. Maybe this show is the beginnings that remain between each of the works, maybe not.”

The 39-year-old artist was born in Haifa, studied in Boston and New York, and now lives and works in Tel Aviv. His oil on linen paintings depict simplified shapes in bright pastel colors and have gained Guy notable attention with critically acclaimed shows across Europe. For his second solo show at Galerie Derouillon in Paris, opening March 16, Guy will present five new works with three large-scale paintings playing center stage. “I’m really excited about this show. It’s the second show that I’m doing with Galerie Derouillon in Paris. The first show we did was ten works that I had painted at Villa Lena in Italy. For this show I really wanted to go big!”

Each of Guy’s pieces depict everyday scenes: Kitchen II (2016/17), shows Guy’s own Tel Aviv apartment, while The Piano Lesson is a more intimate portrait of Guy’s son playing the piano. This particular work is a reinterpretation of a Matisse painting with the same title painted 100 years ago. “The more time passes the more I go back to the greatest: Matisse and Piero della Francesca.” And yet, while each piece references the past, Guy’s oil paintings are brushed in a modern, pixelated blockwork style with Instagram-friendly potted plants and swimming pool blue hues akin to David Hockney’s colorways. “I’m trying to capture so many simultaneous things with these works,” he says. “Naming them and painting at them might diminish those qualities. But hopefully what I’m aiming for is all in the paintings for all to see.”