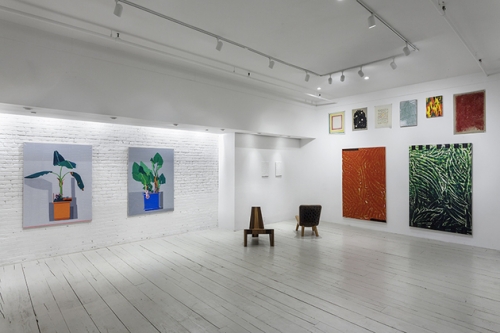 Aiming to introduce the New York audience to a more experimental and younger facet of its program, Luciana Brito – NY Project is pleased to announce the opening of its third exhibition, Reflector, taking place on March 6, 2018, amidst the busy Armory Week. This group show establishes a dialog between three young São Paulo artists represented by the gallery – Pedro Caetano (b. 1979), Rafael Carneiro (b. 1985), and Tiago Tebet (b. 1986) – and a selection of artists from the same generation who are based in New York City: Gustavo Prado (b. 1981, Brazil), Nicole Wittenberg (b. 1979, USA), Guy Yanai (b. 1977, Israel), and G.T. Pellizzi (b. 1978, Mexico).

The exhibition features paintings – a language in which light plays an essential role – as well as sculptural investigations and installations that use optical and luminous elements, like mirrors and light bulbs. This shared characteristic inspires the title of the show and establishes a common thread between practices as distinct as those of Rafael Carneiro and Gustavo Prado, for example. Furthermore, by creating a dialog between artists who live and work in either São Paulo and New York, the gallery aims to propose a mirroring of sorts between the cities that are home to its two headquarters, promoting encounters between the artistic production from two locations that are far apart from one another, both geographically and culturally.

Israeli artist Guy Yanai works in-between painting and the three-dimensional, creating installations in which his canvases (pop-like representation of architectures, landscapes and still lifes) are integrated to plants and furniture pieces, bringing to the outside of the paintings environments that are similar to those that they depict. G.T. Pellizzi’s research also occupies a space between different media and is mostly concerned with color. In Reflector, the artist exhibits a new series of paintings on wood, along with luminous sculptures in which he uses elements from civil engineering to create effects in space that are reminiscent of the shapes and colors of movements including suprematism and concrete art, and in dialog with the American tradition of light art.

Finally, Gustavo Prado presents installations created with mirrors and industrial machinery. By dislocating certain utilitarian objects to the field of art, the artist creates works that appropriate, in a contemporary way, elements from movements like light art, op-art and kinetic art. Among the works shown, he will create a site-specific for one of the basement’s industrial refrigerators with different types of industrial mirrors, to which he will incorporate chairs designed by Sergio Rodrigues (1927–2014).

According to the proposal of Luciana Brito – NY Project / Espasso Annex’s project – a partnership with Carlos Junqueira that aims to explore the convergences between design and art from a Brazilian perspective – the show also includes design pieces signed by contemporary authors, such as Claudia Moreira Salles, Isay Weinfeld, and Rodrigo Ohtake. In the spirit of the experimental investigations conducted by the selected artists, the design pieces are presented in a way that transgresses their functional aspects: one of the environments of the show, for instance, is created by a mountain of chairs designed by Carlos Motta. Strategies such as accumulation and displacement from traditional spaces and uses underscore the value of such objects as aesthetical pieces that are the outcome of extensive labor and formal research.