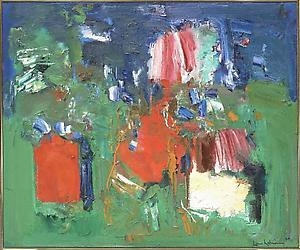 German American Abstract ExpressionistHans Hofmann credited his time teaching painting at UC Berkeley in the early 1930s for his "start in America as a teacher and artist."

Hofmann thanked the university with a gift of nearly 50 paintings representing the breadth of his life work, from Surrealist-influenced compositions to more physical and abstract images. The paintings are on display at the UC Berkeley Art Museum through Dec. 21 and represent the largest collection of the noted painter's work in any museum.

These works were the foundation on which this institution was built," said Lucinda Barnes, curator and director of programs at the UC Berkeley Art Museum. "Hofmann selected these works at time when he was beginning to look back on his own work and career, and they represented to him - and us - the very best of his output."

The donation to UC Berkeley - Hofmann taught at Berkeley and across the U.S. after emigrating from Germany in 1930 - was followed by the artist's gift of $250,000 to help the school open its museum in 1963. In addition, Hofmann became an influential mentor and educator to hundreds of art students at Berkeley and universities across the globe. Many of his American and international students went on to achieve international acclaim, including Frank Stella, Helen Frankenthaler, Red Grooms, Alfred Jensen, Wolf Kahn, Lee Krasner and Louise Nevelson.

In 1960, at the suggestion of Erle Loran, then-chair of UC Berkeley's art department, Hofmann donated what he considered to be one of his best paintings, "Summer Bliss." The painting was given to Berkeley in honor of Professor Worth Ryder, who had died that year. (Ryder and Loran had studied with Hofmann years earlier in Germany, and had invited him to teach at Berkeley.)

Three years later, Hofmann donated nearly 50 paintings and pledged $250,000 in support of the University Art Museum (now the Berkeley Art Museum and Pacific Film Archive). At Hofmann's request, Loran was closely involved in choosing the dozens of paintings that made up the gift. Loran selected from among Hofmann's older works as well as choosing strong examples of his later efforts. Hofmann's celebrated rectangle- and color-filled paintings, influenced by Cubist approaches to form, are a significant part of the collection.

Hofmann, who was born in 1880 and died in 1966 at the age of 85, was frequently quoted in the art world. He once noted that "space must be vital and active - a force-impelled pictorial space, presented as a spiritual and unified entity, with a life of its own."

The Berkeley exhibit, "Hofmann by Hofmann," which opened in July, includes "Fantasia" (1943) and later works "Nocturnal Splendor" and "Gloriamundi" (1963), both characterized by contrasting colors and shapes that give the images a three-dimensional feel.

The ability to simplify means to eliminate the unnecessary so that the necessary may speak," Hofmann said.