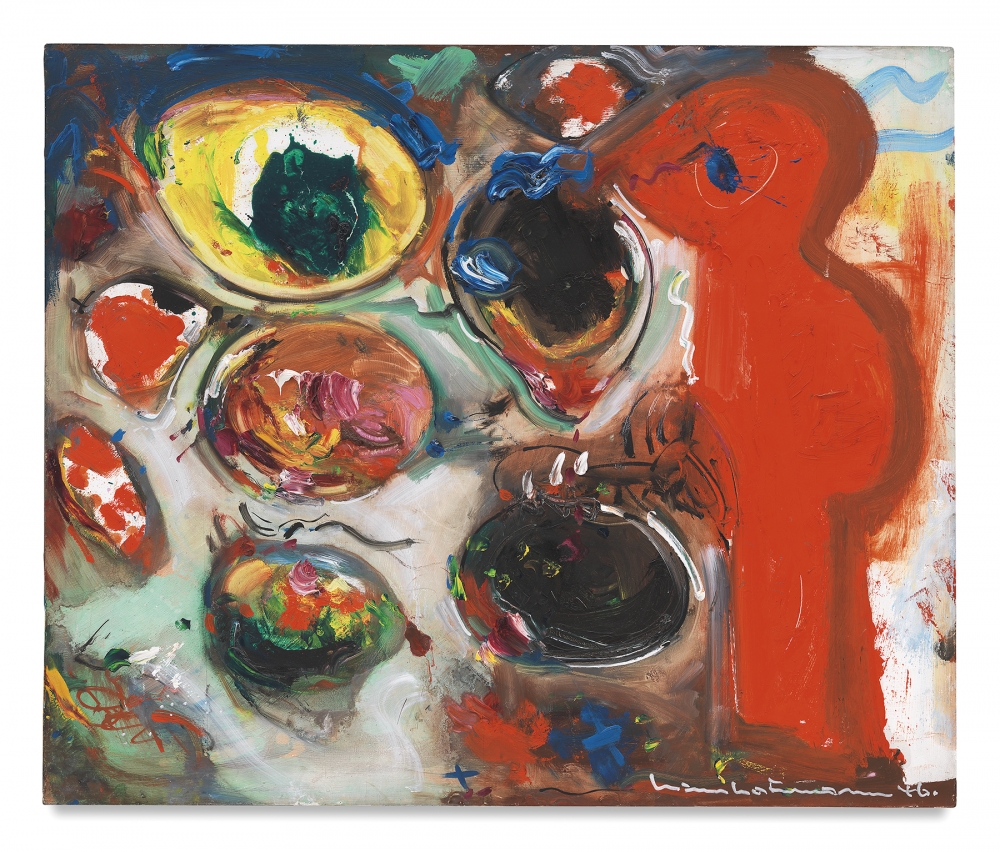 In 1903, Hans Hofmann (1880 - 1966) moved from Munich to Paris where he saw the influential Paul Cézanne retrospective at the Salon d'Automne in 1907, worked with Henri Matisse, and became friends with George Braque, Robert and Sonia Delaunay and Pablo Picasso, eventually fusing Fauvism and Cubism to new effect, and later adding Wassily Kandinsky to the influential mix. Though he was present at the birth of abstract painting in the early twentieth century, he was not one of its midwives, but rather a synthesizer of their ideas, opening what is generally regarded as the first school of modern art in 1915. He settled in the United States in 1932 and finally found his own artistic voice. In 1934, he reopened his school, holding classes in Manhattan (and during the summers in Provincetown, Massachusetts), where he taught many American luminaries: Helen Frankenthaler, Red Grooms, Allan Kaprow, Lee Krasner, Joan Mitchell, Louise Nevelson, Irene Rice Pereira, Larry Rivers, and Richard Stankiewicz, among countless others. Without Hofmann there would be no Abstract Expressionism, nor would abstraction have come into its own in the United States, replacing representationalism as the “in” mode of art throughout the 1940s and ‘50s.

The Hofmann exhibition at Miles McEnery Gallery offered up a sampling of the artist’s aesthetic triumphs. On view were nine oils - five on canvas, the rest on panel - made between 1941 and 1962. Conspicuously missing were the “slab paintings”- grand architectonic works such as Pompeii, 1959, in which volume and structure seem to matter more than gesture. Most of the pieces in the show were of modest scale: The littlest were [Landscape], ca.1941, a turbid field of jittering bright greens, yellows, pinks and blues, and The Conjurer (Small Version), 1946, an eccentric amalgamation of figuration and biomorphism left out to cook under a relentless sun. Caprizio, 1962, and Snow White, 1960, showed Hofmann’s genius for subtle gesture. In Caprizio, burly moments of brown and crimson get tangled together in a kind of Gordian knot. Snow White offers up a large patchwork of azure marks duking it out with a dirty ruby triangle that floats above a larger hunk of red. All of these aspects are settled upon a sickly shade of dun. Snow White’s formal elements feel irreconcilably at odds with one another, but coherence inside of chaos is often the theme of Hofmann’s compositions. Also, that the artist prioritizes painterliness as a way of both resisting and defying flatness, as well as acknowledging its indispensability and inevitability, aids in such frenetic consolidations.

Hofmann is famous for his so-called push/pull theory of spatial construction. His innovative “drip” technique of painting and his “painterly attacks” were both appropriated by Jackson Pollock. But a better way of understanding what his art is about is to consider his serious interest in science and mathematics - and,most particularly in electricity. Alongside his art practice, he developed and patented an electromagnetic comptometer (or calculator), a radar device for ships at sea, a sensitized lightbulb, and a portable freezer unit for military use. Apparently he also harnessed the phenomenon as the inspiration and justification for electrifying painting, charging non-representational images with strong colors and lines. The energy source propels the pulsing and impulsive qualities of Hofmann’s paintings, be they gestural or geometrically inclined—this is the reason his works radiate power. —Donald Kuspit