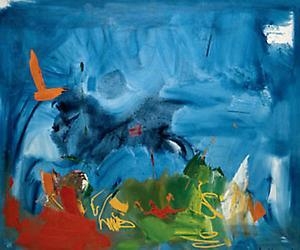 May 3 at 8pm Spoonbill & Sugartown Books 218 Bedford Avenue, Williamsburg, Brooklyn May 5 from 5-7pm Ameringer | McEnery | Yohe 525 West 22nd Street, New York, NY . . . . . . . . . . . . . . . . . . . . . . . . . . . . . . . . “We seize reality through relationships of space, light, and movement. Hofmann showed how these relationships create a parallel world in art.” Victoria, BC – March 26, 2011. Artists tell the story of a charismatic teacher and his ideas in Color Creates Light: Studies with Hans Hofmann by Tina Dickey, recently released by Trillistar Books. The author will travel to New York in early May for two book signings: on May 3 at 8pm, a signing at Spoonbill & Sugartown Books in Williamsburg, Brooklyn, and on May 5 from 5-7pm, a Cinco de Mayo signing at Ameringer McEnery Yohe in Chelsea. The Hofmann school was one of the first schools of modern art when it opened in Munich in 1915. From the early thirties until 1958, despite poverty, world wars, oblivion, and immigration, Hofmann’s schools in New York and Provincetown became a nexus of visual experimentation for generations of students, who included collectors, critics, curators, dealers, and hundreds of influential artists and teachers, generating not just a variety of art movements, but also economic and cultural growth. This book, according to Jed Perl of The New Republic, represents “the missing chapter in the history of the period.” A contributor to numerous books and exhibition catalogs related to Hofmann and his former students in the United States, Canada, Spain, and Germany, artist and author Tina Dickey has served as editor of the Hans Hofmann Catalogue Raisonné (1997–2006) and chief research consultant for the PBS documentary Hans Hofmann: Artist/Teacher, Teacher/Artist (2002). Dickey had studied painting for a decade with former Hofmann students when she discovered Hofmann’s mimeographed lectures in 1990. She used the lectures as a basis for an oral history, now held in the Archives of American Art. “As a painter, I’d ask questions that wouldn’t occur to art historians,” she says. “I thought that if Hofmann’s ideas could come alive through his students’ voices, future artists would have a ‘Rosetta Stone,’ for Hofmann could be considered a conduit. He was an abstract painter, yet his ideas were based on older traditions.” Over two decades of research and revision, the artists’ voices— poetic, humorous, metaphorical— coalesced into “a visual common sense,” Dickey recalls. “We seize reality through relationships of space, light, and movement. Hofmann showed how these relationships create a parallel world in art.” Media contact: Tina Dickey, author pajarita@trillistar.com