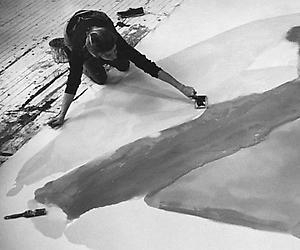 When Helen Frankenthaler died in December 2011, two weeks after her 83rd birthday, most tributes to her invoked "Mountains and Sea," the delicately colored, luminous stain paintings that she made in 1952, as a precocious 23-year old, a work that has come to define her almost as narrowly as "The Scream" defines Edvard Munch. Just about every article recounted, as well, the story of the powerful effect "Mountains and Sea" had on Morris Louis and Kenneth Noland, when they saw the picture in Frankenthaler's studio on a 1953 visit to New York, almost everyone quoted Louis' description of the seminal painting's young author as "the bridge between Pollock and what was possible."

Identifying the doyenne of American abstraction with a single work, like recounting the celebrated anecdote and the equally celebrated comment by a distinguished (and older) peer, has become a cliché of the history of recent art. There are good reasons for this, of course. "Mountains and Sea" is an astonishing painting. It continues to surprise and seduce with its combination of audacity and beauty; it's an elusive image, all pools and trails of transparent color, at once potent and fragile, bold and lyrical. Painted by an abundantly talented woman at a time when artists were predominantly male and supposed to mature over decades before making anything significant, it's a work that may resonate with youthful energy but can hold its own in any context for its intrinsic merits.

In addition, "Mountains and Sea" had significant repercussions for several generations of abstract painters. Louis's much-quoted comment neatly sums up both Frankenthaler's originality and her importance to the history of postwar American art. The method by which she executed "Mountains and Sea," a process of flooding raw canvas with thinned-out color, apparently controlling the spread and run of fluid paint by sheer will rather than by manipulation, pointed the way for countless other painters, including Louis and Noland, to explore the implications of Jackson Pollock's poured webs without imitating his distinctive skeins and tangles. As Frankenthaler herself famously said, she realized, as an ambitious young painter recently graduated from Bennington College, that "you could become a de Kooning disciple or satellite or mirror, but your could depart from Pollock."

Her distinctive "departure" from Pollock resulted in paintings that were as transparent, radiant and seemingly spontaneous as watercolors, but with the authority of large size. In contrast to most of her contemporaries - the many de Kooning "disciples" or "satellites" of the early 1950s- Frankenthaler made unmodulated color, rather than gesture or the material presence of paint, the principal carrier of emotion and associations in her work. More precisely, it was color that seemed immaterial and purely experiential, color that sank into the canvas and became part of a weightless "optical" expanse intended to address the eye alone, without triggering tactile associations. Conspicuously lacking was the wet-into-wet, dense, contingent layering so common among the artists of her generation - a kind of paint handling that the critic Clement Greenberg dismissively termed "the Tenth Street touch."

Not that Frankenthaler rejected de Kooning out of hand. Some of her earliest, fluently drawn abstractions, made in the first years after she returned to her native Manhattan from Bennington and set up a studio, reveal how eagerly she assimilated the lessons of the artists, including de Kooning, whom she admired. Works such as "The Sightseers," which predates "Mountains and Sea" by a year, pay homage to the biomorphic, mysterious imagery and ambiguous spaces of de Kooning's pre-"Women" pantings, as well as the work of Joan Miró, Wasily Kandinsky, and Arshile Gorky. But they do so in terms that are clearly Frankenthaler's own. Despite their floating, allusive shapes, which clearly have cognates in the work of her chosen ancestors and older colleagues, these early pictures are already notable for the assurance and forthrightness that characterizes all of her efforts. They are devoid of the signs of hesitancy, anxiety, and doubt-the dragged, wet-into-wet paint application-so characteristic of works by the exponents of the "Tenth Street touch." In her works of the 1950s, both pre- and post- "Mountains and Sea," rather than implying , as her colleagues did, that the image before us was a mutable solution that had looked some other way in the past and could change again, Frankenthaler convinced us that her uninhibited scrawls, stains and floods were exactly what she intended, occasionally incorporating her handprints or writing "Helen" large across the surface, as punctuation or an assertion of her presence.

Yet good as "Mountains and Sea" undoubtedly is and influential as the stain method proved to be, to allow either this single picture or the technique it embodies to be emblematic of Frankenthaler's achievement is misleading. There was a lot more to her than that, starting with the simple fact that after completing her iconic canvas, she continued to make inventive, original work for a half century, testing herself against many different mediums and disciplines. Always experimental and notably fearless in the studio, she was eager to try new materials and processes. Both at home and when she traveled, she worked constantly on paper, employing whatever came to hand - pen and ink, watercolor, and, on an early trip to Paris, hotel ink and her own lipstick on drawer lining paper - to make everything from rapid, allusive notations to fully developed paintings on paper. Frankenthaler was a famously innovative, uninhibited printmaker who took full advantage of the visual and expressive languages of aquatint, lithography, serigraphy and woodcut, collaborating with master printers in the U.S. and internationally, including a Japanese living national treasure; refusing to acknowledge limitations, she daringly combined processes and is said to have enlarged the scope of various printmaking techniques. Among other ventures into new territory, she made remarkable steel sculptures in her good friend Anthony Caro's London studio, worked with a tapestry "publisher" on public-scale hangings, created an immense, painterly ceramic "mural" under the auspices of Syracuse University's clay program and designed sets and costumes for the Royal Ballet.

Frankenthaler didn't even remain faithful to the influential way of putting paint on canvas that she is credited with having invented. Although, throughout the 1960s and early 1970s, she fully explored the pictorial implications of her method, creating drawn from encounters between puddles of light-struck hues and allowing edges to carry the burden of drawing, in works such as "Pink Lady," (1963) or "Mauve District," (1966) and although many other painters adopted her kind of disembodied staining, Frankenthaler herself soon began adding other things to her vocabulary. From the 1970s on, she became increasingly interested in orchestrating a variety of surfaces and paint applications, spurred, in part, by the evolving technology of acrylic paint, which she had adopted fairly early because its intensity and fluidity were obviously sympathetic to her way of working. In paintings such as the masterly "Green Though in a Green Shade," (1981), subtle physical inflections reinforce the delicate modulations of a near-monochrome expanse, variations in density and transparency that take the place of the exuberant color contrasts typical of her early works.

Frankenthaler even - briefly - investigated the robust drawn articulations permitted by the newly developed thick acrylic gels of the late 1980s and 1990s in works such as the punningly titled "The Rake's Progress," (1991) in which her characteristic "wristy" - her word - touch becomes strikingly physical. As well, throughout her long life as a painter, as if in defiance of her reputation as a master of sun-drenched chromaticism, Frankenthaler often explored an entirely different palette. Dark, mysterious picutres, sometimes veiled in transparent light tones, such as "Casanova," (1988) or subdued earthy ones - "mud from the bottom of the pail," as she described them - both suggest the chiaroscuro of traditional painting and recall her early grounding in Cubism.

The fame of her early stain paintings and her identification with transparent, fragile hues notwithstanding, the majority of Frankenthaler's most achieved later works - that is, those made from the 1970's on - derive at least part of their expressiveness from the way their luminous (or dark and smoldering) color shifts from brushy, transparent washes to declarative, superimposed strokes. The unstable expanses implied by these physical differences, reinforced by rich chromatic relationships ranging from abrupt to nuanced, remind us that Frankenthaler frequently described herself as "a spacemaker" and always insisted that the most fundamental aspect of her work was the understanding of Cubist structure instilled in her by her earliest teachers, who included Paul Feeley, at Bennington, and an Australian Cubist, Wallace Harrison. (Frankenthaler is always described as a student of Hans Hofmann's, although she spent only a few weeks one summer at his Provincetown school; she later became close to Hofmann and his wife, Miz, when she was married to Robert Motherwell and the couple spent summers on Cape Cod.) Frankenthaler always said that "having New York in the 1950s" was crucial to her formation as an artist. She enjoyed a privileged, intimate view of the dynamic art world of those years, thanks to Greenberg, whom she met in 1950, when she organized an exhibition of work by Bennington alumni for Jacques Seligmann Gallery. They spent a great deal of time together over the next five years and through Greenberg, the young novice met and visited the studios of most of the adventurous artists in New York.

The more we know about Frankenthaler, the more contradictions reveal themselves and the more complex her seemingly straightforward directly executed paintings become. It's instructive, for example, to learn that the native New Yorker and confirmed urbanite who always lived in Manhattan and described her studio as "a dog walk away" from her Upper East Side home also lived and worked for decades in Connecticut, overlooking Long Island Sound. While Frankenthaler's paintings are always abstract, it's clear that the changing light and moods of water, sky and distant shore informed the works made in her ocean-side studio, culminating, perhaps, in the pulsing distillation of light, "Warming Trend," 2002, one of her last major works. It's not wholly surprising, however, since in a larger sense, real experience, including experience of the natural world, reverberated in Frankenthaler's paintings from the start. The relatively specific watercolor notations made during her travels, along with her acute observations, often have echoes in large-scale paintings - including "Mountains and Sea." The painting was made soon after a trip to Nova Scotia, where she had painted watercolors, and, as she often said "the landscapes were in my arms."

More unexpected is the discovery that an artist so closely identified with abstraction and with enlarging the possibilites for her own and future generations - with what her friend Anthony Caro calls "the onward of art" - should have looked not only to her lived visual experience as a starting point for her work but also to the art of the distant and recent past. From the early 1950s on, Frankenthaler used Old and Modern Master paintings that she admired as points of departure. Her relationship to these sources was complex. We may recognize the dominant hues of the works that triggered a response; the expansive darks of some of her "mud from the bottom of the pail" pictures turn out to spring from her enthusiasm for such masters of black as Rembrandt and Edouard Manet. At other times, as in "Hint from Bassano" (1973), the scale of the generating image is dramatically enlarged but the color and structure survive tenuously, like an imperfect memory or a perfume.

Plainly, we categorize Frankenthaler at our peril. Far from being defined by a single, early painting, she resists easy labels. The only identifying title she herself ever accepted was "painter," always refusing the qualifying adjective "woman." Of course, no qualifiers were necessary, since she was not only as good as any of her male colleagues of her generation but better than most. It's time to look beyond "Mountains and Sea."