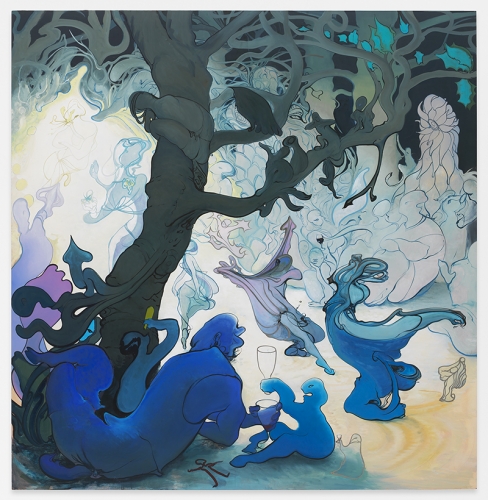 NEW YORK, February 4, 2019—Paintings, sculptures, video, photographs, and works on paper by 32 contemporary artists will be exhibited in the galleries of the American Academy of Arts and Letters on historic Audubon Terrace (Broadway between 155 and 156 Streets) from Thursday, March 7 through Sunday, April 7, 2019. Exhibiting artists were chosen from over 130 nominees submitted by the members of the Academy, America’s most prestigious honorary society of architects, artists, composers, and writers. The recipients of the Academy’s 2019 Art and Purchase Awards will be selected from this exhibition.

The Academy’s art awards and purchase programs recognize artists at various stages of their careers. This year, nine participating artists will receive art awards. Additionally, paintings, works on paper, and sculpture are eligible for purchase and placement in museum collections nationwide through the Hassam, Speicher, Betts, and Symons Funds and the Academy’s general endowment. Among the fifteen artists whose works were purchased and placed last year were Chester Arnold (Huntington Museum of Art, WV), Robert Barber (Minneapolis Institute of Art, MN), Jim Long (Orlando Museum of Art, FL), Ruth Root (ICA Boston, MA), Barb Smith (Museum of Arts and Design, NY), Nari Ward (Smithsonian American Art Museum, DC), and Marjorie Welish (Philadelphia Museum of Art, PA). Since the purchase program’s founding in 1946, through the legacy of Childe Hassam, more than twelve hundred works have been purchased and donated to museums throughout the country. For further information, please visit artsandletters.org/awards.

In addition to electing new members as vacancies occur, the Academy seeks to foster and sustain an interest in Literature, Music, and the Fine Arts by administering over 70 awards and prizes, exhibiting art and manuscripts, funding performances of new works of musical theater, and purchasing artwork for donation to museums across the country.