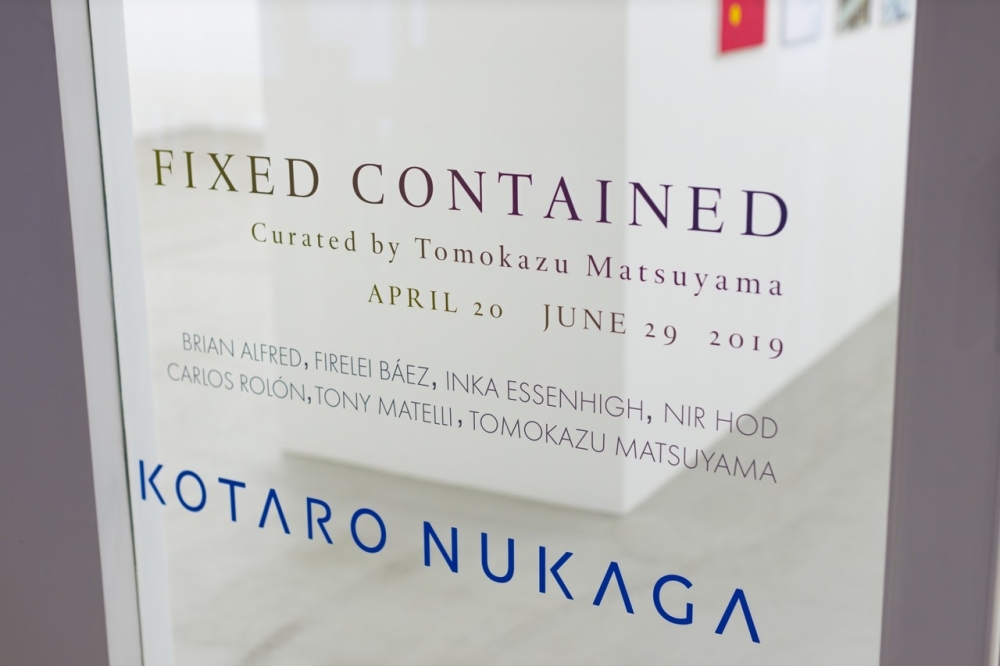 Each of the artists featured in FIXED CONTAINEDsamples ornamental aspects of visual material culture. Rather than merely using such elements for their patterned forms, the artists mix them in unique ways to create works that message the complexity of our times.  Alfred’s work features flat and abstracted lines in his paintings to illuminate the two-dimensional skeleton of urban views.  Similarly, Essenhigh uses seemingly organic shapes and structures to create dream-landscapes for the viewer.  While differing in mediums, both Báez and Matelli investigate the human form; Báez combines a variety of ornamental patterns that together form fluid portraitures of strong spirits, and Matelli uses the traditional mediums of marble and painted bronze to mash-up traditional statuesque forms with quotidian waste from our everyday.  Rolón combines flat gold leaf or mirrored backgrounds with a foreground explosion of shapes and flowers reminiscent of bird and flower paintings from the Eastern painterly tradition.  Hod creates shiny mirrored surface paintings that reflect back an abstracted version of the viewer to themselves.  Matsuyama continues to fuse publicly recognizable elements of contemporary culture with traditional iconography to create a contemporary vision of the now.

The title of the exhibition, FIXED CONTAINED, references a potential contradiction between adapted or remixed objects, and the reality that the structures placed around such objects can be made fluid in order to provide for new meanings.  The artists featured in this exhibition play with this tension by contesting the dichotomy between that which is non-functional adornment and that which is otherwise not.  Taking these works entirely outside of the realm of the useful, these works instead point to the hybridity and complexity of the world we live in, by strategically sampling and further remixing these flat, ornamental patterns or elements. In doing so, each of these artists posits their own answer to the complex multi-layered world we inhabit. By expanding and, at times, exploding the ‘contained’ vessel, these artists clarify that the act of recombination not only requires deep knowledge of, and respect given to, the past, but may be one of the only ways to innovate in today’s information-overladen society.