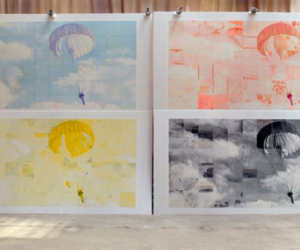 SOHO — Vesuvio Playground will double as an art gallery for the month of October, featuring a mural project by downtown-based artist Isca Greenfield-Sanders — and the help of more than 200 local kids.

Teaching artists at the Children's Music of the Arts (CMA) in Hudson Square took the tiles and helped more than 200 children fill them in with colored pencils, before returning them to Greenfield-Sanders so she could reassemble into four parachute images.

Greenfield-Sanders said she was impressed with the children's coloring and how it enhanced her own work.

The murals feel delightfully playful," she said. "The children drew with equal parts glee and sophistication.  I am really inspired by these young artists!”

The project was organized and sponsored by three local downtown non-profits — CMA, parks group Green Below 14 and public art group SmartSpaces — along with the city's Department of Parks and Recreation.

Playground Parachutes" will be on display from 10:30 a.m. on Oct. 1 until Nov. 1 at Vesuvio Playground at the corner of Spring and Thompson Streets in SoHo.