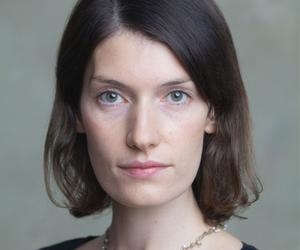 Isca is our seventh subject in a new SLICE Special Guest Series which introduces our readers to extraordinary, creative people ⎯ wherever we may find them.

Isca Greenfield-Sanders is an artist based in New York City. Her large scale mixed media oil paintings are found in the public collections of the Solomon R. Guggenheim Museum; Brooklyn Museum; Museum of Fine Arts (Houston); Victoria and Albert Museum (London); and Fine Arts Museum of San Francisco. Isca’s solo exhibitions include Haunch of Venison, New York and London; John Berggruen Gallery, San Francisco; Galerie Klüser, Munich; and Baldwin Gallery, Aspen. Her upcoming solo show will be at Ameringer Mcenery Yohe, New York in 2017. Isca has been featured in a wide range of publications, including Artsy, Art in Print, Modern Painters, Huffington Post, Artnet Magazine, ARTnews, Vanity Fair, The New Yorker, ARTFORUM, and Time Out New York. She graduated from Brown University with a double major in fine arts and mathematics. In 2001 Isca was a visiting artist at the American Academy in Rome. When she’s not working, you can find her with her husband, the painter Sebastian Blanck, and their two sons. Isca lives and works in New York City’s East Village.

Motto: A place for everything, and everything in its place. (I’m a bit neat).

Where were you born?

What were some of the passions/pastimes of your earlier years?

My early passions were watercolor, gymnastics, and mathematics.

How did you begin to realize your intrigue with the visual arts?

I grew up surrounded by artists. My grandfather is a painter, my uncle is a sculptor, and my father is a photographer and filmmaker. I always made watercolors, and took art classes very seriously. In college I began to exhibit my work in galleries.

What led to your fascination with the marriage of photography/painting?

I started making paintings that layered photography with watercolor and oil paint in 1997 when digital scanning and archival printing were at their nascency. I am as trained in watercolor as I am skilled with computers. It was exciting to work fluidly with both mechanical and handmade processes. Early on, I made the choice to use found sources in lieu of my own photography. I built a “system” through which I could process images, changing the scale and the medium, and that felt purposeful. I developed a painting surface that was distinct which felt like a win. College was a thrilling time. I am indebted to Leslie Bostrom, my mentor at Brown, and the broader Visual Arts Department for giving me the space I needed to figure it out. I have been making paintings this way for almost 20 years. Growing up the daughter of a photographer and the granddaughter of a painter, I think the marriage of photography and painting was not only generationally appropriate for me to tackle but also specific to my upbringing.

Why does this form of artistic expression suit you?

As I just described, I engineered this way of working to suit my specific interests and it very closely maps the way I think. I was a math major in college (in addition to studying art) and have always been attracted to process.

When and how did you get your start in the art world?

The Italian art dealer, Sergio Bertaccini, gave me my first show in the spring of 2000, I was 21 years old. I traveled to the opening of the show during spring break from my senior year at Brown University with my then boyfriend, now husband. It was our first trip together.

How would you describe your creative process as you begin a painting?

What materials do you prefer to work with?

Why is nostalgia/found memory so important to your work?

I have a poor memory for certain things (people and narrative) and a razor sharp memory for other things (numbers, placement, and processes) so I am fascinated by what people remember. My work often takes photography as its subject, insisting that the still image has come to replace “true” memory.  If you try to recall something from your childhood, I would guess that the details of your narrative have been informed by a photograph.

What are some of the influences that steer your use of light, color, and shadow?

How has your style evolved over the years?

I have made more paintings, and so I am more skilled. I didn’t do any graduate work because I started exhibiting right out of college. Seventeen years into continuously exhibiting, you learn a few things.

Do you have an artistic resource that you frequently turn to?

I like to read manuals. For example, when I bought Photoshop in college it came with a 1000+ page manual. I ate that thing up, reading all the tech specs on the mediums that I use. I also read up on the difference between sable and synthetic brushes (not surprisingly, I like each for different things.) I guess you could say I’m a techie.

From where do you draw inspiration?

For the last 17 years I have worked from amateur vintage 35mm slides. I love the transformation from something discarded (I typically buy lots at auction, contents of houses that have been sold, etc.) to something exalted.

Whom in your life would you like to thank, and for what?

I would like to thank my deeply talented husband for making it cool that we do the same thing and for being a feminist. And, my parents for my education and for being my ardent supporters. Also, my sister for being different from me and for keeping me in line.

Is there a book or film that has changed you?

Who’s Afraid of Virginia Woolf, the play by Edward Albee and the film by Mike Nichols. It is family obsession.

What drives you these days?

On October 1, 2016, I opened a public art project, Isca Greenfield-Sanders: Playground Parachutes, four 4 x 8 foot murals made in collaboration with over 200 children for a local playground in downtown NYC. And, in March 2017, I will open my next solo show in NYC at Ameringer McEnery Yohe in Chelsea.