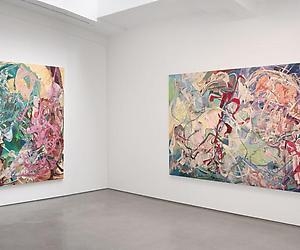 In the early 20th century, the Futurists declared a new approach to painting that would capture the frenetic pace and overwhelming sensations of cities remade by technology and speed. Fracturing the picture into multiple perspectives and depicting movement as overlapping frames in a film, works like Gino Severini’s Dynamic Hieroglyphic of the Bal Tabarin (1912) verged toward a dazzling abstraction. Updating the tenets of that short-lived movement for the current era, Iva Gueorguieva’s recent paintings at Ameringer | McEnery | Yohe (“A Stitch in Graft”) —one of two concurrent shows for the Bulgarian-born artist— produce similar spellbinding effects. To stand before "The Tree Thinks of Tumbling" or "Raft" (or anything else here) is to experience a dizzying sense of free fall, a dreamlike plunge into information overload, as if you were traveling through Google itself. Fluttering ribbons, organic shapes, streaks, strokes, solid and washed-out colors, and fragments of unidentifiable things swirl in giant maelstroms. Impressions of the world rush past, but you recognize almost nothing. As in chaos theory, larger principles—a clockwise spiral or a beautifully focused palette—establish a vague organization, but the movement is endlessly disorienting.

A more personal theme runs through her Grown Child series. Playing again, it seems, on Futurist notions of time and space, Gueorguieva depicts the gestures between herself and her son, mixing both memories and visions of moments 20 years from now. The style remains resolutely complex, but in each center, a kind of calm openness — such as the womb-like oval of "Grown Child: Gathering" — makes the mothering instinct clear.

Over at BravinLee Programs (“Cut”), figurative elements are more obvious in the artist’s delicate and much sparer collages. The same jagged geometry, now formed by roughly cut strips and sections of paper, takes on more structure, delineating human forms. You can recognize a head, an arm, and the body of "Crooked Man," a delightful piece that may remind you a little (like other portraits of men here) of Dubuffet’s primitivism. In the back room, the enchanting "Borne Down" comes closer to the massed images of the paintings. In a view of family life, quick sketches of birth, storybook animals, and sex float in a Pollock-like sea of lines and shapes—a perfect transition between two sides of a significant talent.