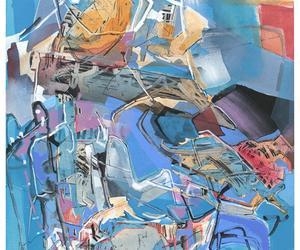 One of the main advantages of sculpture is its possibility to express multi-dimensionality. Of course, there are techniques in painting aiming to represent multiple dimensions. Iva Gueorguieva is a contemporary artist whose paintings are characterized by extraordinary techniques with the goal to represent variable-dimension worlds. She experiments with cutting and collaging the surfaces of her paintings in order to explore the shallow yet real space produced by the cut and the glued edge. Working with sculpture was a natural step in the practice of Iva Guoeorguieva, deeply involved with the productive tension between the materiality of paint and support, and the possibility of illusory or “only-perceived” space. Finding ways for expressing the “materiality” in space is inherently related with sculptures. One of the main features of sculptures is its three-dimensionality that largely eases the positioning of subject-matter in space and time. The latest series of paintings and sculptures by Bulgarian-born artist Iva Gueorguieva will be exhibited at Ameringer | McEnery | Yohe in New York.

The Art of Iva Gueorguieva

Iva Gueorguieva is Los Angeles-based artist who is known for her large-scale abstract paintings that feature a frenetic mix of overlapping collage, line, shape, and color. At times, figures, fragments of architecture, or mysterious machines seem to emerge from the mix, conjuring an enigmatic narrative or elusive memory. However, her compositions are quite abstract, and it is very difficult to recognize the subject. Gueorguieva tends to experiment by cutting and collaging the surfaces of her paintings. Subsequently, in a number of works on paper, she begins by removing most of the material, revealing a lattice or a system of tendon-like elements. These works hover on the wall, producing real shadows as part of the composition. In Gueorguieva’s work, the real shadow insists on pulling away from two-dimensional space into three-dimensional space, and she proceeds to create armatures that could support the fragments of painted and printed images. She chases the images, away from the wall, into the open space, eventually creating sculptures (check out our list of 10 contemporary female sculptors).

The Ameringer | McEnery | Yohe gallery will present the recent sculptures and paintings by amazing Iva Gueorguieva. The sculptures were produced through a series of residencies at Graphicstudio in Tampa, Florida. Gueorguieva worked with found metal, epoxy clay and various printmaking techniques (masters such as El Anatsui or Tadashi Kawamata use found material for their sculptures). The sculptures are titled “Cosm” 1-5, as in “microcosm” or “macrocosm.” The titles point to encounters with variable-dimension worlds. Each piece traverses a terrain that is both physically present and illusionistic, a smeared dichotomous zone, which Iva Gueorguieva has explored extensively in her collaged paintings and works on paper. The “Cosm” sculptures are surrounded by a series of small paintings whose vertical format echoes the figurative character of the sculptures, placing the two distinct types of object in dialogue. Upon close inspection one can observe that a number of fragments from the etchings and litho prints have migrated to the flatter space of the paintings.