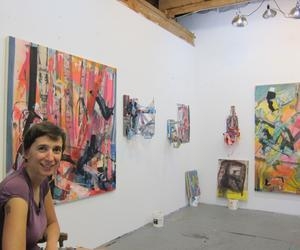 Iva Gueorguieva tells stories, or better stories are told through her. Her ‘memory body’ filters the myriad narratives that she observes and that saturate her consciousness. Iva has an acute memory, collecting observations from the books she reads and the world at large; random bits of information, a persons face, their expression, their posture, the room in which she saw them, fragments of life’s living theater, collected like colorful pieces of fabric. Then in an improvisational approach she unfurls these memories and ideas onto her vast canvases weaving them together to inform the meta narratives which emerge in the spontaneous approach she takes in creating her large scale ‘abstractions’. “I do not paint images, the paintings are improvisational, I bring everything from my life experience and knowledge to the work. I set up limitations to create within, it is a way to frame the work, to guide it into an area of interest, a subject emerges within these constraints.”

Though her paintings are ‘abstract’, she uses abstraction as a way to give herself the freedom to invent form-they are open to accommodate all of the episodic references that flow from her hand, from her body. A figure may emerge out of the complexity of her gestural-architectonic weave, appearing from a rich sea of cross-referencing elements. In fact she spoke of her process as an approach to have a ‘figure’ emerge from her vast amalgam of forms, it is a form of subjective roaming, to lose oneself is to discover something new, to see things anew. We spoke of the writer Rebecca Solnit, whose work we both love, of her ability to show that the ‘images’ we know of the landscape-the city, are never neutral, but framed by ideas and systems that inform our perception of them. Iva spoke of how in Solnit’s writings she explores a ‘space’ and that from that investigation a ‘figure’ emerges, a figure from history maybe, and that the way in which her investigations lead organically to this emergence is an important idea to Iva’s approach to painting.

The idea of the city is important to her work it is a system and a metaphor of political power and desire. She said of this, “The city is a place of power where flesh and the machine meet, where bodies-close together in these air conditioned spaces, procreate. City’s are an organism, a system of power, the heart of power.” Her paintings are crowded, filled with many elements, subjective players that converse in crowd scenes of desire.

She said that she thought of cities as organisms and that she wanted to reshape them, to stack them and compress them, sweeping them together into different forms. We spoke about the architectonic quality of her work, of how some of the ‘abstract’ paintings that I have seen in past exhibits oscillated between a flat allover abstraction with passages that had spatial depth, creating a hidden spatial pressure; the ambiguity translating into a kind of subjective compression. Iva makes sculptures that are complete, independent works in themselves, but they are also a way for her to feel the spaces that she creates, to climb inside of the architectural forms of her paintings and to embed those spatial feelings into her body. They are experiential objects in whose making, informs and shapes her ‘body memory’, when she paints the feeling of this spatial depth is a part of her, in fluid improvisations these physical memories emerge adding another element to this rich space of untethered subjective dialogue.

Iva brings all of her experience to her paintings, what she is reading, a fragment of a story or a memory, something that moved her and embedded itself in her soul. She showed me a painting with loosely applied gestural strokes of yellow filling the central area; strips of red material have been glued to the surface creating a feeling of movement and light. She said of this piece that it was a reference to a road trip she took many years ago, that they stopped their car in the desert and there was an abandoned silo off a short distance, as she walked towards it an enormous white owl flew out sweeping past her. She continued walking and inside of this vast space another white owl was flying in circles slowly ascending toward the light to escape through an opening at the top. She said it was one of the most beautiful things she has ever seen, and that she was trying to capture something of it in this painting.

Toward the end of our conversation she mentioned that she felt her impulse toward story telling was partly from her Bulgarian heritage, that it is ingrained in her DNA to infuse her visual gestures with narratives. Iva pointed out a painting with a figure of a woman, a witch bending down, her body a compilation of fragments of gestural strokes of blacks, reds, and turquoise, a kind of ‘stenographic figure’ within a swirling field of forms. She told me that historically In Bulgaria it was the women’s task to go to the mountain spring to collect water. It was a place of danger as well as a source of life. One could be bitten by a snake or abducted by someone or some evil force. It was a place for story telling and a place where stories originated.

Iva’s paintings are like a river of ideas, their movement reshaping the landscape around us. It is a place where the dynamics of memory, ideas, images and primal forces are translated into visual dramas. She is a translator of the senses; sound, taste, touch and smell are transmuted into a visual experience. Her paintings contain the sensation of desire, the aspiration to translate all of life, power, love, desire and death into her work to convey the mortal weight of time.