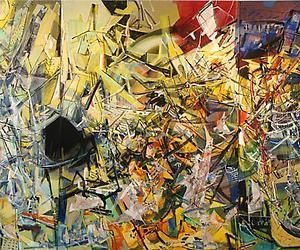 Chaos has been called a science of surprises, and Iva Gueorguieva's paintings, drawings and relief-sculptures are nothing if not a rigorous embrace of the chaotic. But the turbulence in her work also seems as bracingly orchestrated as it is random and haphazard.

Six recent paintings on linen or paper and three relief constructions at ACME are anchored in the front room by a big triptych nearly 10 feet high and 15 feet wide. Visually, “Man Hunt” reads from left to right. Splintered shapes and whiplash lines of force pick up density and speed as your eye travels across the surface, but unexpected detours crop up along the way.

One is created by color. A palette that starts out cool green and pale blue suddenly becomes warm red and orange, then shifts into icy hues characterized by dramatic contrasts.

Gueorguieva largely contains the distinct color patterns within each separate panel, subtly stopping your eye's otherwise unimpeded movement across the field at the edge of each canvas. The physicality of the painting's edges is underscored.

The composition is all nervous energy. Linear drawing combines with cut-out shapes of painted and collaged canvas that are like bandages applied to a wound. Sometimes the arrangement slides seamlessly from one panel to the next; elsewhere it makes a discontinuous leap.

At one point a hole appears to have been blown in the canvas, as if a cannonball had been fired from behind. The left-right movement across the picture plane gets an illusion of perpendicular thrust. Gueorguieva located the painted void smack in the center of a seam between panels, compounding the exuberant interplay of illusion, material object and physical space.

The show's relief constructions incorporate strips and patches of hand-dyed and printed muslin hanging from exposed metal frames, like tattered sails on a battered rigging or debris that has washed up on shore. Destruction is the agent for restoration, in which the only recourse is to expect the unexpected. In that, Gueorguieva's incendiary work is as timely as it is troubled.