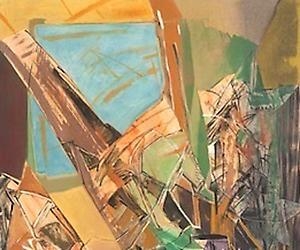 Iva Gueorguieva’s current exhibition is replete with symbolism. The year referenced in the title of her acrylic and oil stick collage "Seated Woman: 1974," 2013, points to the ultimate origin of the piece: The Los Angeles–based artist was born in 1974 in Sofia, Bulgaria. Yet the work points to its art-historical origins as well: Seated Woman owes a great deal to Pablo Picasso, Umberto Boccioni, and Giacomo Balla. The largest work on view is the sixteen-foot collage "Man Hunt," 2013, a triptych whose panels merge into a complex design full of semiotic nods to a bustling metropolis. The work features an illusionistic torn portal, which also brings to mind another art-historical predecessor: Ilya Kabakov and his "The Man Who Flew into Space from His Apartment," 1988, an installation centered around an empty makeshift sling, from which the protagonist had just catapulted into the cosmos leaving behind a prosaic Soviet apartment. In both cases the viewer is left to contemplate the scene cluttered with markings and objects but with the man hunted and the man who flew long gone.

In "Shadow Blister," 2013, Gueorguieva momentarily lets go of her signature painterly bravura. This small collage explores the physical limitations of the stretcher, as linen support at the bottom of the composition is exposed. Not reaching the bottom edge of the picture, the image appears to shift. The rectangles of translucent markings in the upper portion effectively contain the black, negative space without any pretense to trompe l’oeil illusion.

Perhaps ironically, the two-dimensional "Shadow Blister" generates a more compelling depth than the three-dimensional "Shelter" and "Mechanical Breath," both 2012, two mixed-media sculptures mounted on welded steel frames with steel panels dissecting the space. Yet Gueorguieva regains spatial complexity in her 2013 mixed-media wall relief "Head." Here, the title of the show, “Spill/Frame,” is amply illustrated in the entanglement of dyed muslin and linen, whose fragments trespass the imaginary rectangle of the canonical frame.