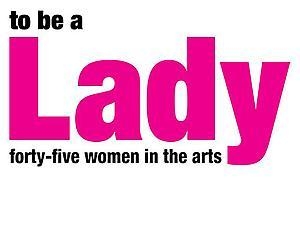 Curator Jason Andrew brings together forty-five artists born over the last century who happen to be women. Striking examples by historic protagonists, Alma Thomas, Louise Nevelson, Alice Neel, Lenore Tawney, Louise Bourgeois and Grace Hartigan set the stage for an exhibition designed to challenge and reshape the meaning of the word lady.

For centuries, the word lady has been a nuanced term for women prescribed by social mores. Politeness, good manners, and correct attire – all refined by rituals – and behaving properly shaped what it meant to be a lady. To be considered as such was once the goal of every woman across the economic spectrum. At least, that’s what the men thought.

The word lady, here, is a provocation. For much of the early 20th century, women were up against the “lady painter” image which historian Linda Nochlin suggests was “established in 19th century etiquette books and reinforced by the literature of the times.”[1] Despite what might appear to be great progress for women in the arts, these societal expectations continue into the present. As Lee Krasner said, “I’m an artist not a woman artist.”[2]

It is not the intention of this exhibition to be a comprehensive survey of women in the arts, it’s a selection of artists I know, have come to respect and whose aesthetic I admire. These women have problematized and played with gender identifications and characterizations, from lady to woman to other in some form, consciously or unconsciously. But here, specifically, it is the physicality of the art making that I am drawn too. Whether it be Louise Bourgeois’ corporeal sculpture, Lenore Tawney’s transformative weave, Grace Hartigan’s expressive stroke, these ladies exude a tactile process and manipulated rigor which lays the groundwork for those that followed.” -Jason Andrew, exhibition curator

The exhibition aspires to re-introduce the work of artists: Edith Schloss, Ruth Asawa, Pat Passlof, Jay DeFeo, Susan Weil, and Judy Dolnick. Others are in need of closer inspection including: Hermine Ford, Mimi Gross and Judy Pfaff. There is a large presence of mid-career artists including Nancy Bowen, Lindsay Walt, Elisabeth Condon and Jessica Stockholder. Their work in many ways bridge the gap between the established vanguard and the newest generation that includes Austin Thomas, Ellen Letcher, Vanessa German, and two painters of merit Brooke Moyse and Nathlie Provosty.

The exhibition has a cross disciplinary component including photographs by Barbara Morgan, text work by poet Kathleen Fraser and a video installation by choreographer Julia K. Gleich.

Multi-media, interdisciplinary, and cross-generational with seminal works by each artist, this exhibition reminds us that the world is full of great artists, and many of them happen to be ladies.