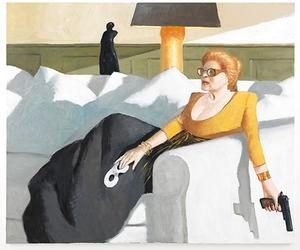 Julio Larraz describes the vivid images that he paints as visions that come to him as dreams he sees during the day. These images may come on and off over the years, though some, Larraz reveals, “are recent ones, other are long-time friends. There is a mixture of it. I don’t like to do theme works. I prefer to take something and see it from fresh eyes, rather than see it forever.”

The result is a distinctive mélange of dynamic imagery that makes for an incredible collection of work, offering something for everyone in a delightful compendium of endless innovation. From seascapes, landscapes, and aerial views to still lifes, imaginary portraits, and other figurative works, the work of Julio Larraz takes us into a fantastic world brimming with an elegance, grace, wit, and charm.

Larraz observes, “I see things in a day dream. I see it right in front of me. There are images floating around and you have to grab them instantly. They are very vivid images. Some form and you can use it in a painting. I’ve always been lucky to find them there, waiting for me. I think the formula is freedom. If you are an artist and going to paint, you have to know you have all the possibilities in front of you. You have to let your mind go. One has to dig deep in one’s self to find the most interesting thing you have inside of you that you can’t find anywhere else.”

It is this distinction that makes Larraz one of the foremost Latin American painters of our time. Born in Havana in 1944, Larraz is the son of a newspaper editor and began drawing at an early age. In 1961, he and his family moved to the United Stated, first living in Miami, then Washington, D.C. and New York. Larraz cites a number of New York artists as influences, particularly that of Burt Silverman.

Larraz comes full circle as he returns to New York with his inaugural show at Ameringer | McEnery | Yohe Gallery, New York, on view October 15-November 14, 2015. Featuring fifteen paintings, the exhibition will showcase Larraz’s skills of handling light and shadow and enigmatic narratives embedded in his paintings.

After fifteen years with Marlborough Gallery, Larraz observes, “This is a new venture for me with people that are really fantastic. They are great in their treatment and their representation. They are very helpful.”

With the gallery’s support, Larraz maintains his freedom to create and to actively engage his imagination in his exploration of the world through his work. His masterful seascapes be still the heart, as they perfume the senses and engage the mind. Larraz explains, “The best thing is to keep to yourself and don’t look to the left or the right. You know some things are dangerous and you don’t try them—and that is dangerous. You re depending on someone else’s imagination and yours is atrophying. You must use your own. Imagination is something you have to exercise like muscles. When I am in front of a canvas, I do whatever I want. If they like it fine. If not, fine. Artists won’t tell you that but I am talking to myself. It’s a soliloquy, a monologue, and everyone else can enjoy it. That’s how I see it. If it works for me, it works for everyone else.”

His singularity of style makes him a master of the form, invoking a wide array of references that make him a poet with a palette of oil paints, evoking epic poems with each of his works. Larraz mentions Homer in our conversation, acknowledging the importance of recreating him. He observes, “The poet Homer is a figure that is historical and yet we know very little of him. I take advantage of this and I make Homer a friend of mine. I create a blood and bones figure of his essence now, in a present way of dressing. Bringing historical figures into the present has been a favorite with different painters.”

By interchanging reality and imagination, Larraz takes us on a wonderful ride filled with unexpected surprises and provocative enigmas. The pleasure of knowing without knowing, and always being somewhere in between is what engages our imagination to fill in the gaps and meet the artist in a new space, somewhere that is at once familiar and foreign yet oh-so-very inviting.