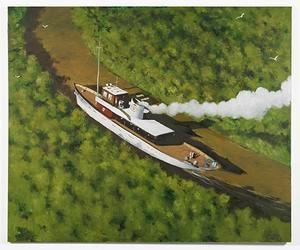 With an ease and precision that comes only from a lifelong dedication to one’s craft, it is no wonder why so many consider Cuban born artist Julio Larraz to be one of the most important Latin American artists working today. Larraz creates monumental works of art that are majestic and refined, but still somehow accessible. His works, though painted naturalistically, are often highly imaginative, and this duality is what draws the viewer in.

Larraz has had an impressive career dating back to the 1960s when he drew political caricatures for the New York Times, The Washington Post, The Chicago Tribune, Vogue Magazine, and other publications. He is the recipient of an award from the American Academy of Arts and Letters and his work can be found in museums, galleries, and private collections all across the globe. I had the great honor of speaking with Larraz about his work and what he thinks his art means.

AF: How did your journey as an artist begin?

JL: That was a very long time ago. As a young man I was so interested in drawing and painting. I guess that most young children are interested in art, but some of us retain it. It’s a necessity to communicate, a need to record our lives. We don’t understand that when we are children. We understand only years afterwards that it really has nothing to do with showing off, or communicating with others, it’s actually about communicating with one’s self. It’s a way of exercising our demons. The same way as people would talk to a shrink. Once it’s out, you see it and understand it better.

AF: When did you start painting?

JL: I was fifteen when I first started dabbling in painting, but it was not until ten years later that I began painting professionally, mostly in watercolors and then in oils. Initially I became very interested in something that had always caught my attention and that I found I had a proclivity for, which was caricature. I loved doing caricatures, even in school. I started doing caricatures in New York in the late 60s. I am very grateful to an artist who taught me a lot and that was David Levine. He was a great caricaturist. He helped me not only with caricatures but also painting because he was a very accomplished painter as well. Burton Silverman and Aaron Shikler were two other very prominent, accomplished artists I learned from.

AF: Apart from your mentorship with them, do you have any professional training as an artist?

JL: No, I never had a formal education in art. Whatever I learned I learned by myself and with the help of older friends, older painters who were very generous in helping me with my drawing and painting.

AF: Is anyone else in your family artistic?

JL: No, nobody. It’s curious. There are families that have several painters, but not mine. Although my youngest son is very interested in the arts.

AF: How would you describe your art?

JL: I think it’s realism, traditional realism. It’s naturalist. It has no pretention of anything else but painting. That’s what interests me. I’ve never been interested in being part of a tribe, an “ism.” Painting is painting. If I wanted to make great discoveries I would have gone into science, not into painting. It’s what makes me feel good and I enjoy it. And that’s what most people are afraid of. They think they have to be a very accomplished craftsman in order to do painting, but painting is painting. Take your hand and push paint around and do whatever you want. The most important ingredient is freedom. Freedom is what moves art all around, it’s not the “isms.”

AF: Do you have any artistic influences?

JL: The classical ones we all admire. Degas. Velasquez. Bruegel. They have influence for somebody like me that enjoys realism. Also Francis Bacon, who is completely different from them, but what’s good is good. It doesn’t matter how much time passes, how many exalted critics write about the way it should be. What’s good is good.

AF: What inspires you to create art?

JL: You know that is a mystery to me. I have no idea where these images come from. Where the names comes from. I don’t know what I’m going to paint next, and I never have any problem. All of a sudden it materializes. I see it in my mind’s eye. It’s like everything else in life. The more you pursue things, the more they try to evade you. The only thing that keeps you away from being in a dry spell is not paying attention to it. Be nonchalant and things come. That’s how the subconscious works too. If you make tremendous effort, it paralyzes it. It has a passive resistance against that.

AF: Do you find there’s anything that helps you to get to that place?

JL: Undoubtedly, you have to feed your subconscious. You have to feed it with literature, with music, with cinema, with looking through books of art that refresh what you already know. Those are natural ways. I don’t do it as homework. I do it because I am forever thirsty for new images and new things to read.

AF: Do you have a favorite painting or series? One you felt satisfied you got right?

JL: Well we painters are obsessive. What you’re doing now is always the thing that drives you. Once it passes that stage it belongs to other people. It’s nothing that is yours anymore and you don’t care either. You can’t be entertained by it forever. I tend to forget from one day to the next what I’ve painted. I realized that this is a mechanism the mind has to be able to create new images. You totally forget it, something you were involved with in such a deep way, the next day it doesn’t count anymore. I have two studios. One is where I work and the other one is where things are photographed and once they go there I don’t see them anymore, I don’t keep them around, and that’s how I can clean my mind of what I did yesterday.

AF: Do you have a new project you’re working on?

JL: I’m doing a self-portrait. I have already erased it three times because I don’t think it’s ugly enough, which means it’s not realistic enough!

AF: Do you work on multiple paintings at once?

JL: No, I’ve always worked on one painting at a time, for however long it takes. I like to finish it. It’s like trying to bring a big fish into the boat. I don’t like to have several lines around me! I prefer one at a time.

AF: How long does it take you to finish the average piece?

JL: I would say about a month. Sometimes it takes longer if I keep a painting and rework it and it becomes a new painting.

AF: Do you work from concept, live models, or photographs?

JL: It’s mostly from what I see in my mind’s eye, but if I need details, if I imagine something that is intricate and I need more information, then I use the internet to find images to make sure I’m doing the right thing. I also look in books. But most of it is from total imagination, nothing else.

AF: You said you worked with watercolors then oils, do you still work with oils?

JL: Always with oils. Sometimes I do a fast sketch underneath with acrylic to see where I’m going to put things, like a wash, so I know where I’m going to go. Other times I start with the oils. Oils are definitely what I use because there is nothing like them, the depth that you can get with oils is phenomenal, and I feel very comfortable with them. I also love pastels. Sometimes I mix pastels with watercolor. I do a large watercolor and then go on top of it with pastels to give it more weight. It’s always different. It’s different according to what the painting needs, what it reflects, what’s in your mind to show.

AF: Do your paintings have a political or personal message you’re trying to convey?

JL: No I never do that. I’m sure people can read into it what they want. It’s better that way. I never make commentary in my paintings. They are narrative, but narrative in a way that people can read into them what they want. That’s the only way somebody can make a painting their own without the artist telling them. You might say that this is very ambiguous. But that is good. Ambiguity helps the person make the painting their own.

AF: Where can people view your work? Are you represented by a gallery?

AF: Is your work in museums?

Yes, in several museums, in Florida, Mexico, Columbia, Texas, and other places.