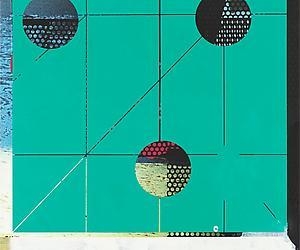 This group of works deals with different aspects of the titular words, “Levity/Gravity,” from multiple vantages — lightness against heaviness, mutability contrasting steadfastness, irreverence and seriousness, a lack of mooring or ease of movement versus the irrefutable force that binds us to the earth,” said Momin. “While the monumental scale of the historic Navy Pier’s industrial, barrel-vaulted room and attendant periphery is an impressive envelope to any event within, it was particularly striking to have that architecture as the main visual presence in my recollections of the Pier and in part, inspired the selections and thematics of the IN/SITU group.”

Diana Al-Hadid, who often employs materials in ways that contradict their expected physical nature, enabling materials to “misbehave,” presents “Blind Bust I” (2012) and “Blind Bust II” (2012). Drawing on the juxtaposition of weight and volume and the description of negative space and improbable defiance of gravity, this installation enforces the theme behind Momin’s “Levity/Gravity.” [Courtesy of the artist and Marianne Boesky Gallery]

Los Angeles-based artist Kevin Appel’s selected paintings are from a series entitled “Salton Sea,” based on images that the artist took at the eponymous town in California. The complex history of the site — partly a fascinating natural phenomenon in the formation of a “sea” in the middle of the desert, then for a time a booming man-made resort town which ultimately descended into a near-abandoned, polluted, and dangerous desert slum — builds a mysterious, ghostly, underlying narrative. [Courtesy of the artist and Ameringer | McEnery | Yohe]

Sanford Biggers’ newly-commissioned “Untitled” (2013) sculpture calls attention to the architectural setting and to the spacious “sky” above Festival Hall. The large cloud-shaped sculpture is constructed of cotton and feathers, both materials evoking lightness and ephemerality, reinforced by the form of the piece. [Courtesy of the artist and David Castillo Gallery]

Jose Dávila’s project, “The contraction between space and time. Time is but the stream I go a-fishing in” (2013) was created specifically for IN/SITU to address both Navy Pier’s spatial characteristics as well as the exposition’s contextual ones. The piece, essentially a line drawing in space, is held aloft by a red helium balloon above and anchored to the ground by a heavy stone below. Throughout the course of the fair, the balloon slowly loses air and descends to the ground, marking time as well as tracking the monumental verticality of the space with its delicate, transitory materiality. [Courtesy of the artist and Max Wigram Gallery]

Dan Gunn’s “Architectural Play Instrument” (2011) engages the spectrum of architecture and how it affects experience, which is an ongoing conceit of his work. Many of Gunn’s installations are a hybrid of theater background, painterly interventions on self-made surfaces, and structures that create both viewing space and spatial constructions. For IN/SITU, Gunn has installed screen- like sculptures that play off the existing architecture and light of the Navy Pier. [Courtesy of the artist and moniquemeloche]

Karl Haendel’s “&&” (2013) is a site-specific exercise in both duplication/reproduction as well as the subtleties of difference. Double vinyl ampersands are distributed throughout Navy Pier’s Festival Hall at various scales, some present and forefront, others more modest and discreetly placed. [Courtesy of the artist and Susanne Vielmetter Los Angeles Projects]

Created specifically for IN/SITU, Glenn Kaino’s “Bridge” (2013), hangs suspended from Festival Hall’s ceiling. The piece from afar reads as a golden-slatted rope footbridge, beginning to cross the space above the viewers’ collective heads. Closer inspection reveals the “slats” are in the form of a familiar arm as they are contemporary casts of athlete Tommie Smith’s limb, made an iconic symbol of Black Power in 1968 when Smith, aged 24, won first place in the 200-meter Olympic Race in Mexico City. [Courtesy of the artist and Kavi Gupta Chicago | Berlin]

Inverting the traditional dynamic of monumental form and precious material, Andreas Lolis’ installation “Untitled” (2012–2013), takes the age-old practice of marble carving into a distinctly contemporary manifestation. The sculptures’ trompe l’oeil presence is subtly disconcerting; a deceptively compelling assortment of art world accoutrement, crushed boxes and packing material, turning the transport of preciousness into the preciousness itself, and yet again disguised. [Courtesy of the artist and The BREEDER]

Michael Rakowitz’s “Dull Roar” (2005) is inspired by the infamously failed Pruitt-Igoe housing project in St. Louis, one of many examples of “utopian” urban planning (typically based on Le Corbusier’s residential ideologies) gone wrong. The installation, an looking over the soft plastic model of Pruitt-Igoe that inflates and deflates, encourages the viewer’s participation in this – our, humanity’s – ongoing history of hope and failure, of ambition and hubris, of power and the humbling thereof. [Courtesy of the artist and Lombard Freid Gallery]

Shinique Smith’s series of multi-patterned sculptures often comprised of found castoff clothing wrapped into weighty bale-like forms or, as in IN/SITU, smaller, cloudlike bundles of color and history, will suspend from the ceiling of Festival Hall. Hanging just at the viewer’s sightline (or slightly above, depending on individual height and vantage point), the clusters of fabric, rope, and ribbon swell and dip like organic or even sentient forms. [Courtesy of the artist and David Castillo Gallery]

Under the banner of IN/SITU, but not a part of Momin’s “Levity/Gravity,” additional artworks will be presented throughout the exposition. Highlights include, Guggenheim Fellow Gary Schneider’s “SELF PORTRAIT: HAIR” (2012–2013), on exhibit for the first time in its entirety at EXPO CHICAGO. Comprised of twenty-one pigmented ink photographs, mounted directly to the wall, the installation measures over ten by sixteen feet. [Courtesy of Stephen Daiter Gallery, Chicago]

Pioneer of American Minimalism and contemporary of Donald Judd and Dan Flavin, Tadaaki Kuwayama works with a continuous line as a section of infinity in “Silver & Gold” (2013). The artist is primarily concerned with the act of perceiving the materiality of silver and gold as a modular sequence of forms that can give the viewer an exacting quietude of a spiritual experience. [Courtesy of Hill Gallery, Birmingham]

Brad Howe’s “Daven” (2013) explores new territory as he plays with simple shapes, illusion, and reflection. Howe asks the viewer to experience his work on his or her own terms. The viewer is a participant in exploring his monumental sculptures — the work becoming more objective as they decide how to interpret it. [Courtesy of Rosenthal Fine Art, Chicago]

Shamim M. Momin is the Director, Curator, and co-founder of LAND (Los Angeles Nomadic Division), a non-profit public art organization committed to curating site- and situation-specific contemporary art projects, in Los Angeles and beyond. LAND was founded in 2009 and has since presented over fifty discreet exhibitions and programs with contemporary artists. Momin’s most recent projects include “Painting in Place” (2013), a group exhibition of contemporary painting presented in the historic Farmers and Merchants Bank in Downtown Los Angeles; “Perpetual Conceptual: Echoes of Eugenia Butler” (2012), an exhibition about Eugenia Butler Gallery as part of Pacific Standard Time: Art in L.A. 1945-1980; and “Nothing Beside Remains” (2011-2012), a multi-site, multi-artist exhibition in Marfa, TX. LAND recently published a monograph on artist Sarah Cain in which Momin contributed an essay on the artist’s work. Previous to founding LAND, Momin was Associate Curator at the Whitney Museum of American Art where she co-curated both the 2008 and 2004 Whitney Biennial exhibitions, as well as numerous solo exhibitions. As Branch Director and Curator of the former Whitney Museum at Altria, she was responsible for organizing exhibitions and commissioning more than fifty new projects by emerging artists for both solo and thematic presentations.