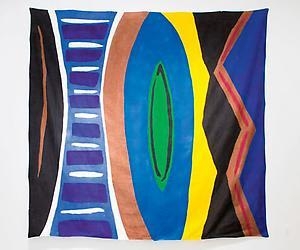 This mini-survey of Kim MacConnel's unstretched fabric paintings from the 1970s, and a terrific one from 2004, is the first of four shows at Salomon this spring collectively titled "American Responses: Pleasure, Reverence, Heart, Home." The successive exhibitions feature work by MacConnel, Ned Smyth, Dickie Landry and Tina Girouard, artists from different parts of the country who were making seminal work in the 1970s and '80s, and who are still active. MacConnel is a leading figure among a group of artists gathered by critics under the sobriquet Pattern and Decoration. Like Lyrical Abstraction and Neo-Geo, the term can feel nearly libelous to the individual artists who find themselves so identified, perhaps because it seems to suggest a strategy of isolating and securing a limited formal objective to the exclusion of psychological and political content. MacConnel continues to be ambitious and fun, more so than many of the other artists linked to Pattern and Decoration. In his best known works, he paints on fabric then cuts the fabric into strips, often of uneven length, which he sews together to create large wall hangings in jumpy Matissean patterns and colors. The 2004 painting, 4 Pattern Dub, on a monumental scale at nearly 9 feet square, isn't a cut-up at all, but an elegant and good-humored fusion of Picasso's late Synthetic Cubist designs and the landscape abstractions of Arthur Dove. MacConnel's last solo show in New York was in 1998 at the revered Holly Solomon gallery. The interpretive field that his paintings have sprung back into has altered considerably since then, and perhaps partly as a result the work here looks utterly fresh. First there was the beautiful Paul Feeley exhibition at Matthew Marks in 2002, which highlighted the precision and formal clarity of Feeley's stain technique. An awareness of those qualities in Feeley's work builds a renewed appreciation for the fluid depth of color that MacConnel achieves by painting directly on unprimed fabric in thin washes of acrylic. Then came "Matisse: The Fabric of Dreams," at the Met in 2005, in which some of the richly patterned fabrics that Matisse used to fill and push forward the negative space between figures and furniture were displayed next to the paintings themselves. Finally, "Color Moves: Art and Fashion by Sonia Delaunay," an exhibition at the Cooper Hewitt Museum last spring, showed that in the hands of an artist of great modernist sensibility fabric design could have the force and inventiveness of the most lively painting of the time. Several works in MacConnel's show attain the scale of Abstract Expressionist paintings, but their jeweled color, rhythmic arabesques, drape and portability capture an animation and lightness that was often lost in attempts to answer Mark Rothko's call for a "tragic sublime." MacConnel looks like a revolutionary, but a playful one by comparison.