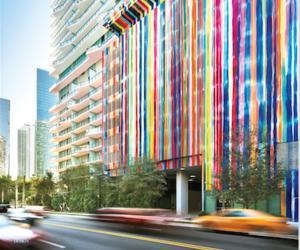 Not one, not two, but three. That’s the number of new buildings in downtown Miami by Arquitectonica International Corporation and the Related Group that also feature large-scale works by world-renowned artists.

SLS Lux, the latest evolution of the brand—and the most VIP—opens in the fall, with hotel rooms and residences by Yabu Pushelberg, an LED facade by Ana Martinez, and an exterior mural by Fabian Burgos. Burgos’s work appears again on Brickell Heights, a two-tower condominium bowing in May with interiors by Rockwell Group. The hotel rooms and residences in the last of the trio, SLS Brickell, are open for business. Philippe Starck handled the interiors, and Markus Linnenbrink was commissioned for the exterior, emblazoning 40,000 square feet of the concrete facade with his signature drip painting.