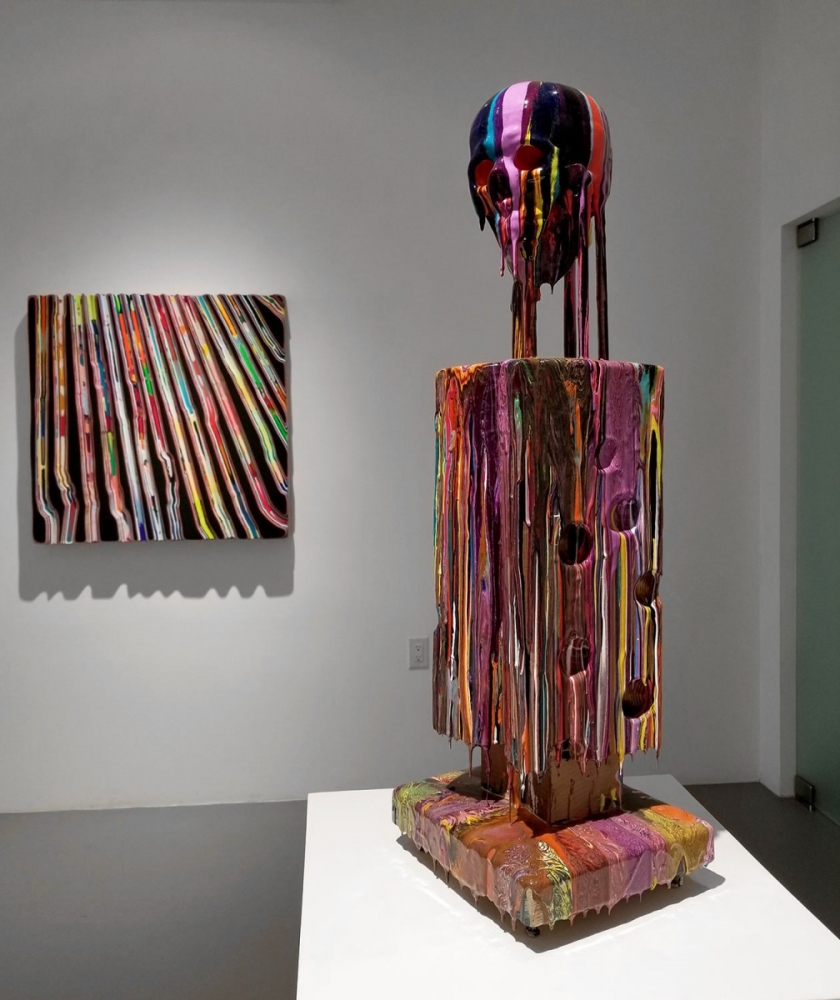 Markus Linnenbrink’s paintings are described as both performative and extreme. Linnenbrink pours and pools resin with cumulative layers of opaque and translucent pigments, building the dramatic physicality of his objects. Using a medium with short-lived malleability, his early epoxy paintings relied on the interplay between liquidity and gravitational pull; while later surface derivations were devised with mechanical assistance, forming concentric depressions, then incised channels. Linnenbrink’s creative vocabulary was described by David Pagel, art critic for the Los Angeles Times, in an essay, Gestural Abstraction in the Information Age: “Linnenbrink paints himself out of the picture. His paintings fly in the face of the idea that art is all about self-expression… Hands-off detachment, unsentimental experimentation, and quasi-scientific exploration play potent roles in his complex compositions, whose surfaces take painting to extremes, both sculpturally and coloristically.”

For three decades Linnenbrink’s inventive methodology has driven with intuitive intentionality – not with an eye to distract, but with the alchemist’s quest for transformation. There’s no question that viewing a Linnenbrink painting is the stuff of ponderous pleasure, but it also transports beyond the constraints of what ‘is’ to what ‘isn’t’. Pagel comments, “After a few generations of art made by artists who seem to believe that the pursuit of knowledge and that of pleasure follow paths that go in opposite directions, it’s refreshing to come across Linnenbrink’s works, which, in their multi-directional ambidexterity, both insist and demonstrate that physical pleasure and intellectual stimulation work in concert, enhancing and amplifying each other’s best features while fueling the fires of a viewer’s experiences.”