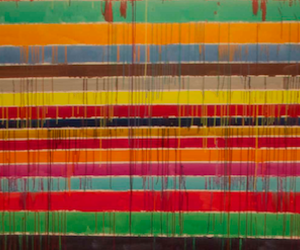 EXPO Projects IN/SITU provides exhibiting galleries the opportunity to showcase large-scale installations and site-specific works by leading artists during EXPO CHICAGO. Curated by Renaud Proch, Executive Director of Independent Curators International (ICI), the 2014 edition of the program is a reflection on artistic practice in Chicago, and on the intense exchange of ideas that the city generates.

At Navy Pier, IN/SITU is also presented alongside EXPO Projects, organized by EXPO CHICAGO and highlighting works by emerging and established artists.

This year and for the first time, IN/SITU connects to the city beyond its traditional site in Navy Pier. It now extends to IN/SITU Outside, an inaugural program of temporary public art installations situated along the Lakefront and throughout Chicago neighborhoods, presented by EXPO CHICAGO in partnership with Chicago Park District (CPD) and Department of Cultural Affairs and Special Events (DCASE).

In his site-specific wall paintings, Linnenbrink layers acrylic and pigment in energetic stripes, embracing the natural viscosity of the materials and allowing the lines to drip and run into each other. His installations utilize the angles and dimensions of each space to create distinctive environments.