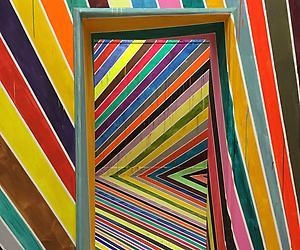 Traditionally, based on two-dimensional painting, and can only reflect the image of a three-dimensional space. The group exhibition  Off the Wall! Image spaces and space forming but r presents positions of contemporary painting that make these classic two-dimensional self-conscious questioning. The invited artists expand the painting, by not restricting their works on the flat image carrier, but include the external architectural surroundings with. Her painting is the volume way up, expands and reaches into the third dimension. It occupies the exhibition space, for example through sculptural and installation-process or by the exhibition space - including the walls and floors - is at an all-over painting. "! Off the Wall" The exhibition title is always ambiguous to understand: In its literal translation it means as much as, but at the same time is in the English language for "unorthodox" or "" Off the Wall "" Off the Wall! " unconventional ".

The selected works represent an Enhanced painting concept that moves in the tension between painting, drawing, ornament, collage, photography, object, cartoon or animated video. Against the background of a now largely non-hierarchical media pluralism in contemporary art - - Because for many artists, the traditional categorizations have long become obsolete, because they work across media.

They call from a diverse system of reference, the references of supposedly extraneous everyday observations extend to references to the heroes of art history. Many of the exhibited works document in relation to the painting a lightness that can manifest itself in a rejection of the brilliant gesture as well as in simplifications and picturesque abbreviations or playful use of symbols, icons and other graphical elements.

Cornelia Baltes (born 1978) made ​​in 2011 on the London Slade School of Fine Art degree (MFA). Since March 2014, it operates a scholarship from the Marianne-Defet painting scholarship in Nuremberg. Many of the exhibits, which are now seen in "Off the Wall", created in the context of this grant. Your observations of everyday objects and relationships of life translates the artist in subtly humorous compositions between figuration and abstraction.Here, the traditional "slow" medium of painting as a supposedly spontaneous gesture with immediate visual image appears frequently joke. Their works also shows a versatile game with the painting: architecture elements into abstract fields of color photographs are digitally "painted" and sculptural installation-like elements appear as a volume-like variant of but actually disembodied painting. Cornelia Baltes works play clever with the generic terms and seem to be all at the same time: painting, sculpture, installation and mixed media assemblage.

Benjamin Houlihan (b. 1975), who completed his studies at the Art Academy in Dusseldorf in 2007 as a master student of Georg Herold, "paint" in a room of the Kunsthalle a frieze on the wall. This frieze band is composed of abstract, red accents, which seem to shimmer on the wall. Unusually, Houlihan color not applying with a brush, but leaks on the wall. In almost impressionistic design manner, spontaneous and free in the use of color, the frieze band plastically appearing enables a new experience of space and questioned at the same time with the wall as a vehicle for the claim to eternity of art.

These ephemeral mural, the artist in relation to two intensely colored, amorphous appearing sculptures build from seemingly random stratified one above the other color foam. Your development process is characterized by Houlihans materials: The sculptures are made of polyurethane, which is colored by the artist with color pigments.The material, a kind of assembly foam that hardens already off after 10 seconds, so that every compositional decision must be made quickly. A similar action painting where paint spattered on the canvas, dripped or poured, also Houlihans sculptures move skillfully in the tension between creative will and chance. In the context of the issue of the genesis of the sculpture appears also interesting because the result of a quasi picturesque ceremony is just not a painting but a sculpture: a clever play with the traditional categorizations of art.

The work of living in Brooklyn, New York artist Markus Linnenbrink (* 1961) includes not only large-scale paintings and sculptures and site-specific wall - floor, and ceiling paintings, which explore the boundaries of painting and their extension into the room. "! Off the Wall" For the exhibition he will transform two exhibition spaces of the Kunsthalle in a walk-all-over-painting: The floors, walls and even the fillets of the blankets are provided to the skylights with arranged in parallel streaks. Due to their specific arrangement and the all-border inking Linnenbrink seems the line between two-dimensionality as dissolve and also suggests the idea of an endlessly expanding space.This color space evokes movements and changes, which irritated the eye can hardly follow and thereby develops an almost psychedelic intensity. The color is emancipating itself from a pure medium for the protagonists of abstract image system, which Markus Linnenbrink refers conceptually to iconographic traditions and art historical connotations. Due to the specific form of color processing, which results from the substance and consistency of the self-made by the artist colors, the color developed a life of its own: drops like streaks tell of the creation process of the color space.

One of the central themes in the work of people living in Basel sisters Claudia & Julia Müller (* 1964 / * 1965) is one of the man and his relationship to the opposite, to nature, to the world. In many cases, it appears the familiar strange and uncanny, as hasty conclusions and fixed assumptions undergo uncertainty - just like the traditional categories of art. So the classical medium of painting and drawing in multi-part arrangements installations with sculptural elements and objects connected and thus experienced an expansion in multi-layered as it is mysterious interior design. These inter-media work spread on walls, occupy the space or extend into it and consist of subtle dialogues between flat and three-dimensional elements between abstraction and figuration. In the context of the exhibition Claudia & Julia Müller are "Off the Wall" for the first time to present their new work group of large ceramic objects in combination with wall-sized drawings.

Christine Streuli (born 1975), the 2007 together with Yves power hammer the Swiss Pavilion at the Venice Biennale designed, has designed a large room installation as a contribution to the 19th Biennale of Sydney in the spring of 2014. The design similar to this work, she has developed a site-specific spatial installation for the Kunsthalle Nuremberg, using wallpaper and brightly colored lithographs, which is entirely in the context of their claim, "to find a way to deal with painting different than previously dealt with it was ".

Streuli dense imagery of furious energy and momentum contain a variety of elements of high and popular culture, ranging from advertising motifs to Arabic motifs. The artist, who already largely adopted from the work with brush and oil paint during their studies, used the gesture of the traditional artistic genius contrary, spray gun and mask as well as various print, collage and squeeze method. Repetition, mirroring and symmetry are fundamental in addition exuberant richness of form and mighty color feature of their work. According to your installations, site-specific thinking is her painting experience dynamic spaces that require an active gaze and body movement of the viewer as well as curiosity and attention rather than a passive, frontal view.

The borderless wall and panel, yes Astronomy Pictures of the Berlin-based artist Alexander Wolff (born 1976), who studied, among others, at the Academy of Fine Arts in Vienna and at the Ecole Nationale Supérieure des Beaux Arts de Paris, can neither be formally nor restrict content to a plane. Contrary to an understanding of painting as a self-contained area, and as a viewer of the exhibition space and autonomous reality, his work from a fundamental involvement with the space are characterized. You will need this as a reference system, are interwoven with it, engage in it out, contain him. Here Wolff creates complex, temporary total situations, address the architectural peculiarities and lighting conditions of the exhibition space as well as their process-and open-endedness. Basis of his work between sensual as appealing materiality - wood, textiles, dirt, bubble wrap and shade, but also photography and video are integrated into the painting - are conceptual considerations on fundamental questions about the nature of the image and its relation to the surrounding space and the viewer.