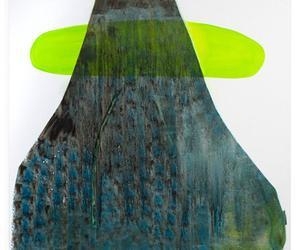 Abstraction finally crystalized into the picture plane in high modernism when the German Bauhaus school and Dutch artist group De Stijl, and individuals auch as Piet Mondrian, Kasimir Malewitsch and Sophie Tauber-Arp, developed distinct styles using destilled geometric shapes in their compositions and designs. In architecture of the time, a sobering developent took place, eliminating ornament, and with it, perhaps, some of its memory and history, from buildings, interior designs and furnishings. Painting discovered its materiality and began to see its surface as the actual drama, as if the viewer were to slowly zoom out of what was once the window into a different world onto its earthly, woven reality. These reductive maneuvers, counteracting the logic of perspective and the mimicry of visual reality, were meant to highten awareness, sharpen the intuition, and express universal truth and beauty. But it wasn’t long before capitalism deveoured and homogenized these honorable ideals, and led them ad absurdum. Today everybody can purchase a piece of that high modernist action, or rather its broken limbs, the remains of a once vital utopianism, by purchasing a "Fjälkinge"-shelf or a "Stolmen"-storage system at their local Ikea store. What can abstract painting do to reclaim the philosophical vigor inherent in its modernist components? Does it even have to? Or have the goals of artists who work with abstraction changed alltogether? Stray Edge brings together four abstract painters who are investigating today's possibilities of the picture plane in order to set in motion a play of perception and meaning. The pictures and three-dimensional works are open to figurative as well as conceptual or literal readings and set in motion a negotiation between arbitrariness and intentionality. Rather than seeking absolutes in truth and beauty, they are undogmatically propositioning the significance of the painted surface.