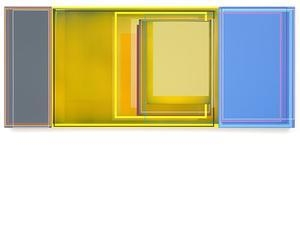 The exhibition [September 25- November 20] features works that engage the building’s architecture by Patrick Wilson of Los Angeles, Odili Donald Odita of Philadelphia, and German-born, New York-based Manfred Mohr. (One could just as easily have selected examples by such female artists as Sarah Morris, Franziska Holstein, or Tomma Abts.)

Glimpses of Odita’s mural beckon from outside. The mural has two prominent, fairly symmetrical forms that could be two flowers, each trapezoidal petal composed of a patchwork of color. The opposing directionality of these colors between each petal suggests movement, as if each were a slowly rotating pinwheel. The overall pattern is suggestive of the traditional pinwheel motif in quiltmaking, but the exacting execution and sharp edges elegantly integrate with the architecture.

The intense, variegated palette of Wilson’s paintings draw visitors into the ground-floor gallery. His geometric shapes of choice are the square or rectangle, overlapping or side-by-side in each canvas. Many of his paintings read as trompe l’oeil renderings of modernist plastic shelving units, with areas receding and projecting to varying degrees. But the surfaces are meticulous compositions of color and line made with thin layers of acrylic paint.

A staircase ascends to a meditative arrangement of work by Manfred Mohr, the most seasoned artist of the group, who was a digital art pioneer as early as 1969. The converging lines and geometry of the stairs and the ceiling anticipate the digitally printed paintings and videos of morphing geometric compositions. The shapes moving around on the screens suggest shifting architectural floor plans or 3-D renderings.

Following the natural flow of the rooms, the space opens up again into a large, well-lit area, displaying several paintings on canvas by Odita. The dynamic combinations of geometric shapes in vivid colors and repeating patterns share an affinity with his mural. The space is long and wide with views on two sides overlooking the campus. The sharp horizontals in the vertical paintings echo the lines of the room, creating an engaging 360-degree landscape, with Odita’s paintings offering satisfying interruptions.