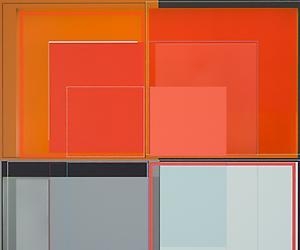 If Patrick Wilson tossed a pebble into a pond, the ripples that emanated from it would probably take the shape of perfectly formed squares or nicely proportioned rectangles. That is the image his exhibition, “Steak Night,” leaves the viewer: an impossible change to the laws of nature that brings you face to face with a world more beautiful that the real one.

At Susanne Vielmetter Los Angeles Projects, not a single curved line appears in any of Wilson’s 14 canvases, whose sides measure from less than 1 ½ feet to more than 7 feet. Right angles, hard edges, crisp contours and impeccably painted planes comprise the entirety of his abstractions. Many resemble 50 or 60 paintings stacked atop one another by an obsessive-compulsive organizer – edges aligned, sizes sensibly arranged and colors logically laid out.

The curves these paintings throw at the viewers come with their colors: indescribably vibrant tints and tones that make all of nature look like black-and-white television – with bad reception.

The most glorious sunsets and the most breathtaking rainbows pale in comparison to the extraordinary artificial palette Wilson has cooked up by mixing high-keyed acrylics with all sorts of mediums, some glassy and translucent, other so smoky they seem chewy. Unexpected juxtapositions kick the visual high jinks into overdrive. Odd complements and weirdly elegant clashes add sizzle to the spectacle.

It’s always a pleasure to come across art made by an artist so in love with what he’s doing that he holds nothing back and gets really good at his passion. With Wilson, it’s even better that that. His paintings make it clear that he is in love with two things: the regimentation of geometric order and the wanton hedonism of luscious colors.

The age-old battle between the intellect and the senses, or the mind and the body, is not resolved in Wilson’s paintings so much as it is brought to a feverish pitch. At once delirious and disciplined, freewheeling and formally rigorous, his complex pictures reveal that every once in awhile you can eat your steak and have it too.