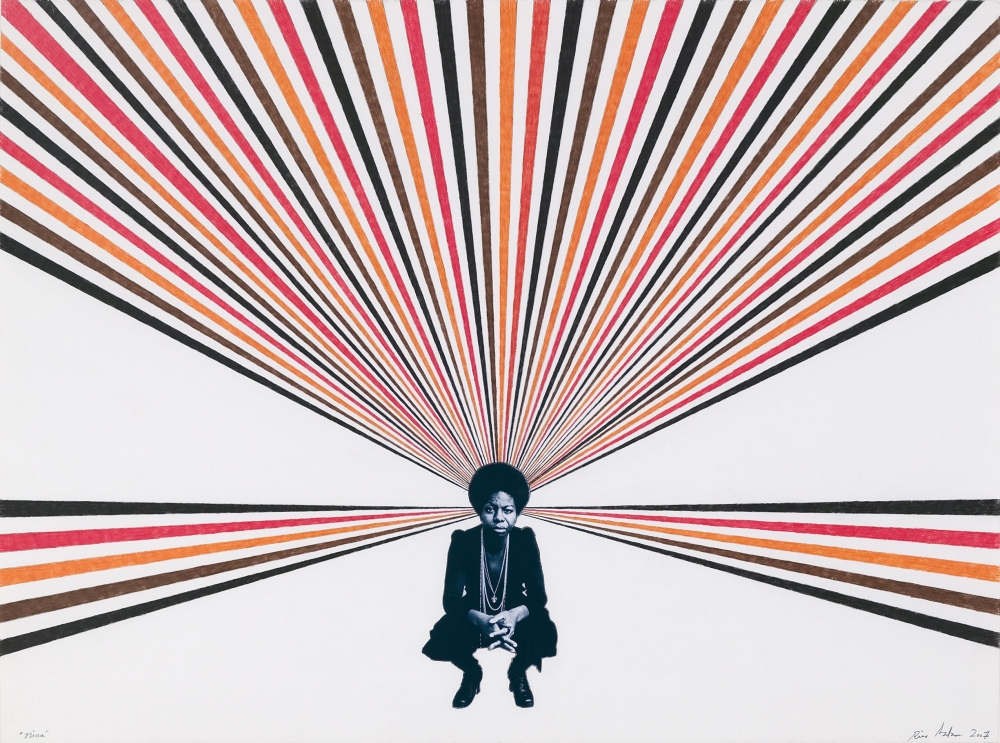 In March, I went to see the first Biennial to be held at the Whitney’s new building downtown, near the Hudson and the High Line, with an artist friend whom I knew to be the best kind of museum companion—entirely comfortable with splitting up until the end of the visit. We took the elevator together between floors but were otherwise invisible to one another until, after an hour or so, we left the exhibition and started to walk. As we went, my friend expressed his disappointment with the show. It wasn’t that the work was uniquely bad or ill chosen. “It’s just—I sort of couldn’t believe how many paintings there were,” he said. “And, like, photographs.” He wasn’t wrong. As Peter Schjeldahl mentions in his recent review, some of the most striking pieces in the show were pictures, more or less straightforward, representational ones: Henry Taylor’s vivid, emotional painting of Philando Castile and the firearm, crudely drawn, that ended his life; Deana Lawson’s gauzy photograph of three shirtless young black men, distinctly reminiscent of album art; a series of goofy, darkly funny paintings by Celeste Dupuy-Spencer. The show had been hailed as political, but how radical could it be, he asked, if it leaned so heavily on these old, conservative forms, however bold the messages they’d been used to convey?

I didn’t say much as he talked; I was sort of embarrassed, and not for him. For me, the pleasure of seeing a familiar world of faces and flora transfigured in a print or on a canvas is more than enough reason to take the subway to a building where art hangs on white walls. I rarely stop to consider that the meaning of a work is to some degree—and maybe, in the end, entirely—captive to the contingencies of history. How can Renaissance-descended portraiture, developed in order to magnify dynastic princes and the keepers of great fortunes, adequately convey twenty-first-century realities or work as an agent of political liberation? Even a retinue of multicolored faces staring out from the gallery walls amounts to little more, according to this argument, than new wine in old skins. It’s the same thing we see elsewhere in American life: every prestigious university and respectable corporation has a glossy catalogue or slick commercial that looks like Noah’s Ark—two, at least, of each kind. But wouldn’t real progress require drastically altered corporate structures or a reimagined approach to tuition? Have the subversions of, say, Kehinde Wiley—however bitingly comic—meaningfully altered the American image culture that often pushes the dispossessed off to the side? Not really. Wiley’s work has slipped smoothly into soap operas and advertisements for luxury goods—proof, perhaps, of the fecklessness of its pluralistic gestures. As I listened to my friend, I wondered: Should this matter to someone like me, who finds all but automatic pleasure in the illustrated workings of a human face?

Confusion of this sort, over the efficacy of figuration, seems, to me, to have been the unacknowledged cause behind the fracas over the Biennial’s most controversial work: a painting of Emmett Till’s mangled corpse, by the artist Dana Schutz. The uproar over the work’s inclusion in the show—which included an in-museum protest and a misguided call for the painting’s destruction—smacked of old-fashioned Protestantism: the famous photograph of Till in his coffin has, understandably, taken on the significance of a religious icon, and the furor over its sublimation into art felt like an enforcement, duly secularized, of the Old Testament commandment against the making of graven images. (Also at work was the newer notion of particularist cultural ownership, under whose strictures Till’s likeness should be off limits to a white artist like Schutz.) One wonders how Schutz’s meditation on Till’s murder would have been received if her painting had been totally abstract—like, for instance, Sam Gilliam’s stormy “April 4,” a blood-splattered tribute to Matin Luther King, Jr., that now hangs at the newly established National Museum of African American History and Culture. Or symbolized in the manner of David Driskell’s homage to Till, also housed at the N.M.A.A.H.C., which refigures the boy as a crucified Christ. Schutz’s riotous, cartoonish paintings often test the boundary between figuration and abstraction—her faux portrait “Face Eater” is a particularly funny example—but, in “Open Casket,” this negotiation between modes betrays an ambivalence about whether this image is hers to portray at all. (Schutz admits her hesitation in a recent Profile by Calvin Tomkins.) Till’s funeral suit is rendered clearly enough, but his face, the site of deepest trauma, explodes into thick, swirling, ultimately evasive strokes, even as the canvas leaves the wall and juts forward toward the viewer. Elsewhere, this half-blurriness is a strength of Schutz’s work, but here it is a symptom of constriction, verging on outright fear—and not only hers.

Into this twitchy atmosphere come, helpfully, two new exhibitions, both at the Studio Museum in Harlem. One, “Regarding the Figure,” curated by Eric Booker, Connie H. Choi, Hallie Ringle, and Doris Zhao, and drawn largely from the museum’s permanent collection, is a reflection—mercifully free of neurosis or worry—on what faces and bodies have meant to art’s recent and distant past. Here, figures are art itself, no mere phase or moment in time. Henry Ossawa Tanner’s lithograph “The Three Marys” presents the women at Christ’s tomb as a study in developing sorrow: three faces, three stages of grief. The Mary closest to us—she must be the Virgin—is just in the middle of raising her hands. There’s mourning again in Henry Taylor’s muted “Homage to a Brother,” where behind the half-silhouetted torso of a departed boy, his name—Sean—stands in monumental capital letters. The forms, alphabetical and bodily, approximate a street mural, or a shrine. Other pieces are more joyful. “Afro Goddess with Hands Between Legs,” a photograph by Mickalene Thomas, is what it says it is: a woman with a gorgeous puff of hair lays sideways on a couch, the foamy patterns of her clothes playing nicely against a checkered throw, her right hand disappearing suggestively into her skirt. Her eyeshadow is cool, penetrating, blue. In another photo, a self-portrait by Paul Mpagi Sepuya, the artist—slim, serious—stands without affect in what looks like a studio, naked, save for a pair of socks, from the waist down. In his hands he holds his pants.

Doubles are a quiet mini-theme of the show. “Sisters III (L: Nefertiti’s Daughter, Maketaten; R: Devonia’s Daughter, Kimberley),” a work from Lorraine O’Grady’s “Miscegenated Family Album” series, sets the Afro-framed face of a young girl against an Egyptian bust in stone. There’s an eerie resemblance between the two—their upper lips peak at the same point—and the photograph feels like a comment on the twin facts of mortality and birth, how they make the basic facial template inexhaustible. Lyle Ashton Harris keeps his doubles in the present: a photo of his face, then the cornrowed back of his head. Now you know him, now you don’t. In Zanele Muholi’s “Bona, Charlottesville,” a woman faces away from us and into a big, round mirror. Her smoothly muscled arm bulges with the slight strain of holding it aloft. Her hair is intricately done; her eyes, reflected, appraise.

The centerpiece of “Regarding the Figure” is Barkley Hendricks’s masterwork “Lawdy Mama,” from 1969. The painting seems more poignant, and somehow more urgent, because of Hendricks’s recent death. A sandy-skinned woman with a huge halo of hair (as you might have picked up, Afros abound) stands against a window-shaped gold-leaf background. The arrangement is meant, obviously, to evoke the atmosphere of sainthood, but the woman’s carriage is unmistakably modern: with her left hand she tenderly holds her opposite elbow. She stares directly at the viewer, with the kind of classical intensity that made me vaguely afraid of portraits as a child. Her mouth is pursed, minutely—maybe consternation, maybe the beginnings of a slow, ironic smile. There are clear political valences in Hendricks’s wonderful, playfully exaggerated portraits of black people in uncountable poses of confidence, cool, defiance, and, more often than advertised, repose. But, reading the writer Antwaun Sargent’s lovely tribute, I found myself excited to learn that Hendricks preferred to steer his discussion of the work away from politics and toward technique. The world’s complications were obvious enough. Painting, however infected by the news, was its own reward, and people justified their presence on his canvases not as instruments or agitprop but as agents of unlikely continuity with the past.

“Icons,” a solo exhibition of recent works on paper by the artist Rico Gatson, curated by Hallie Ringle, takes this ecstasy in personhood and makes it as visible as people themselves. Gatson appropriates old photographic images of famous black Americans—Zora Neale Hurston, Gil Scott-Heron, Nina Simone, Marvin Gaye—and surrounds them with bright, colorful lines that shoot outward from the personages to the borders of the page. Each of his titles is a simple, familiar first name. Purple, black, yellow, and red sprout from Zora’s scarved head. Bird’s horn shouts out black and white. Sam—Cooke, that is—has lines shooting out of his shoulders and his toes. The lines are reminiscent of Sol LeWitt’s wall drawings; these works feel like a slight rebuke of Minimalism’s turn away from the human form. Stripped of the cityscapes and histories into which they were born—and which, by their exertions, they helped, in varying degrees, to change—Gatson’s “icons” held my anxieties at bay, if only for a while. Politics pass away, they seem to say. People never do, in art at least. 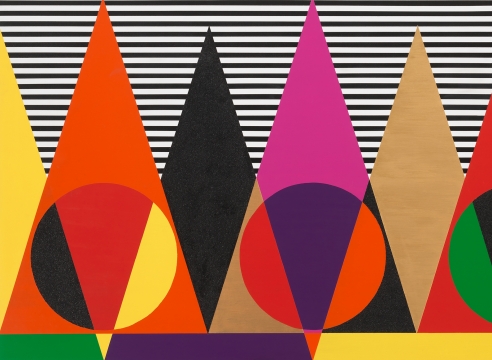