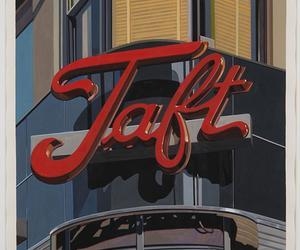 If this were a contest, reigning champion Richard Estes would still take home the hardware for such compelling works as Hotel Empire, with its chiaroscuro play of the blazing summer sun on Broadway set against the welcoming shade by the hotel entrance.

The Guggenheim Museum owns another major Estes canvas in the exhibition, a view from Central Park of the Frank Lloyd Wright-designed Guggenheim building in afternoon light. In addition to the power derived from the details of the three VW beetles lined up on Fifth, the painting gains even more strength from the dashes of white and cobalt blue on the pavement, and the play of cream and bright white on the building’s side.

If I were a judge, I would confer the honors on Estes not so much for the precision of his imagery but, by contrast, for the looser dabs of paint that give the surface its more human dimension. For many in the game, the closer the painting approaches the photograph the more points are scored, but I have long wondered if that dogged pursuit of the documentary truth of the photograph leads down a cul-de-sac of fidelity to an already flat image. Once the photograph is accurately reproduced in paint, what is left to accomplish?

While Estes has my vote as the supreme practitioner of photorealism, still, my favorite artist in the show is Ben Schonzeit. I have followed his career for years with absolute admiration as he switched gears from one style to the next with the ease of a Formula 1 driver shifting gears. There are two luscious paintings of fruit in the Parrish exhibition, and each reveals a different side of Schonzeit’s extraordinary skill.

One is a small acrylic of grapes made in 1974 that hangs in one of the long spine galleries among the valuable works on paper that give the show its scholarly depth and often provide those moments of humanity that seemed to me to be lacking in some of the galleries. The other is a major painting, Winter Apples, which unleashes the artist’s full-blown optical powers on a tumbling bounty of red apples, the central ones presented in perfect focus, the edges blurred as though in motion.

Viewers should give their full attention to this hallway and the terrific works on paper. Included are two small but revealing pieces by Chuck Close, the best of them an exercise in primary colors titled Nat-Horizontal/Vertical/Diagonal, made in 1973.

Midway through this extensive exhibition of numerous large-scale, jewel-toned displays of scale and effect, I sensed a shift from the love of painting for its own sake to a dogged devotion to craftsmanship and accuracy as the ultimate goal. By contrast with the brushy poetry of Schonzeit, for example, the planar delineation of each pane of glass and mullion in Robert Neffson’s The Metropolitan, a panoramic view of the glass canopied courtyard in the Metropolitan Museum’s American wing, is pictorial prose that seems flat and accurate, like a solid piece of objective news writing with all adjectives pared away.

A similar law of diminishing returns applies to the weighted spectrum of pumped-up colors in the palette of Charles Bell. For my taste, too many visual calories were piled on in two works, Kandy Kane Rainbow and Troupe, especially considering that the latter painting is more than a hundred inches in breadth.

There is an almost maniacal passion for shiny surfaces and materials among photorealist artists. By far the oddest, if not the most convincing, work in the exhibition is the materially luxurious Jaws by Peter Maier, a glowing red hot rod at the base of which 11 lozenge-shaped, blurred reflections of admirers capture the way in which the polished hood of a cool car draws a crowd at a rally. The caption lists the medium as DuPont CROMAX-AT on fabricated aluminum panel, about as luxe a paint choice as the vintage car collectors prefer for their prized vehicles.

Switching gears from the meticulous chrome and enamel finishes of Robert Bechtle’s 1970s-era American cars (a ’73 Malibu slipped under a carport, offering a great excuse for a bit of shadow magic) it was almost a relief to see the rough and ready, somehow more appealing Albuquerque Wreck Yard by John Salt, an Englishman among many Americans.

In the gallery devoted to digital works, I was unconvinced by Hilo Chen’s Beach 146, one of the digital offerings. To me, it seemed inert by comparison with the sense of a live brush tip moving on canvas or paper.

The fluid, seductive curves of Robert Cottingham’s signature signs, such as Taft, are irresistible, and lift the tone as well as the artistic rewards of the exhibition back up to the level of its promise.

There is a story about the wonders of tight realism and how a still life of grapes fooled the birds that comes down to us from Pliny. Nowadays, all anybody can remember from this story is how Zeuxis of Herakleia, the best paid artist of his time (his name was woven into his toga in gold) was such a star that it was impossible to put a price on his paintings and he could only give them away as gifts. What is often forgotten is the second act in the story, in which Zeuxis and Parrhasios of Ephesos enter a contest.

Zeuxis turned out a still life of fruit, and birds hovered above this demonstration of sheer mimetic skill mistaking the subject for the real thing. Meanwhile, Parrhasios submitted a painting draped in cloth. The judges were disappointed that the artist had left this veil over the work, until they realized that the linen curtain was also painted, the subject of the work.

Whether the painting of the linen curtain, which fooled the judges, or the photorealist fruit still life, which fooled the birds, was the first example of trompe l’oeil is moot at this point. The point is that this contest in the art of illusion was won by a trick of verisimilitude that shocked even those who thought they had seen everything. That is the ancient and most likely apocryphal version of the big-league magic contest on view in “From Lens to Eye to Hand” at the Parrish this autumn.